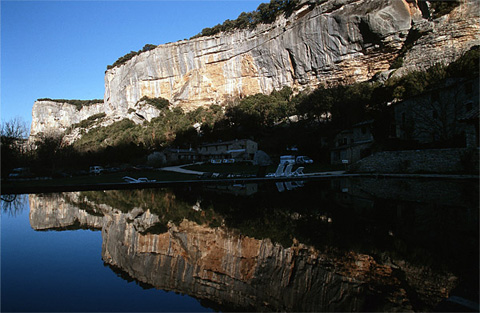 In the mid-eighties, the strongest in the world agreed at least on one thing: Buoux was the best crag in the universe. They travelled from every corner to the south of France in search of the impossible - and Buoux's long steep walls represented exactly this. With its grey compact limestone, good but distant pockets, intense moves and technical slabs, short roofs and steep overhangs, its routes immediately became cult lines, the maximum for the very best. A what a maximum!

In the '80's Tribout, Edlinger, Freira and Raboutou spent months in the valley, pushing the climbing scale ever upwards. But it was above all the Le Menestrel brothers who showed all where the future lay: in 1983 the fifteen year young Marc started the waltz with an 8a of which dreams are made of: Rêve de Papillon. Two years later his brother Antoine freed the first 8b in the valley, Les Mains Sales, only to push things further still with the most famous 8b in the world, La Rose et le Vampire. In 1986 Antoine linked La Rose and La Secte to create the mammoth La Rage de Vivre, the 8b+ par excellance. It was the top, the limit of what was possible. And it took a further three years for this to be surpassed, with a statement impossible to ignore: Ben Moon's Agincourt, French 8c.

The tides turned though and the search for unending stamina meant that, from one day to the next, Buoux was no longer in the limelight. But new routes continued to be added and the crag, now mature, boasts hundreds of five-star routes. All magnificent!

And, despite its reputation, with over 200 routes between 6a and 6c Buoux is above all a crag for the mid-grade climber. If you haven't already been there yet, go. You’ll understand why, together with Verdon and Ceuse, Buoux forms our French trilogy – not to be missed!

Buoux is located in the Provence, in the South of France. From the north take the A7 motorway, exit at Avignon Sud and continue east along the N100 to Apt. From Apt continue south along the D113 to the village Buoux. After the village turn off left at the hairpin bend for the crag.

Spring and autumn. Avoid holidays due to overcrowding, in particular Easter.