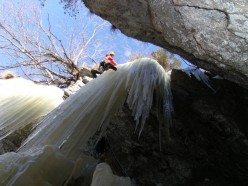 The icefall is located in a gully just above Gressoney St. Jean, hidden up to today (perhaps) from indiscreet glances. Each of the three pitches of Wait and Bleed differ significantly from each other but each are particular and striking.

Take the Turin - Aosta motorway, exit at Pont Saint Martin and continue north along the SR44 into Valle di Gressoney. Drive past Gressoney Saint Jean and reach Dresal after 1.3km, park here. Two obvious drips cam be seen on the hydrographic left: Trechete, formed by three consecutive steps, and a relatively wide icefall which usually has little ice. Wait and Bleed is wedged into the narrow gully circa half-way between the two drips. To get a better view of the gully, walk 100m beyond the houses at Dresal.

After the first houses on the right walk up the small road (Via Dresal) which ends at a small bridge which crosses River Lys. The gully is situated above this bridge. To reach it, descend for 150m on the left-hand side of the river to reach the base of Trechete, then coast back up close to the rock face. Reach the base of the gully in circa 25 minutes.

From below the gully seems to offer mainly rock, blocked by two large boulders.
P1: follow the thin ice ramp to reach the grotto beneath the first wedged boulder. Climb the rock face to the right, reach the crack between the boulder and the wall (bolt) and then continue up to reach the terrace above. Climb the second boulder by climbing left (bolt) and up a difficult and dirty ice chimney. Reach a sliver of ice and grass which exits onto the snowfield. Bolt belay on the left. 40m, 5b M5. Careful ropework needed.
- Ascend the short snowslope to reach the base of pitch 2.
P2: climb the ice, past a wedged boulder to reach a short vertical wall. Climb past this, enter the striking gully and ascend this to the base of the obvious final drip. Ice belay, 40m.
P3: climb the drip to reach the small gorge created between the second drip and the rock. Ascend the drip from the inside (1 bolt) and then move outside beneath the rocky roof. After a few meters get established above the drip and climb through the bothersome grassy overhang to exit the gully. Tree belay, in-situ yellow sling and carabiner. 15/20m.

Relatively straight-forward abseil descent. First abseil: from the tree at the top (in-situ yellow sling with carabiner) a 50m abseil leads to the snowfield at the base of pitch 2. Descend this carefully and reach the first bolt belay. Second abseil: from the bolt belay reach the ground with a 35/40m abseil.

Full ice climbing rack. A medium size rack of camming devices (0,75, 1 and 2) are recommended for added pro on pitch one, which has been equipped with two bolts.

- Two bolts were added to pitch 1 during the descent to reduce rope drag. They do not suffice as pro since they are extremely run-out!
- Avalanche danger needs to be assessed carefully, in particular after heavy snowfall. Numerous hanging drips loom above the upper section of the icefall.
- Pitch 3 could be climbed on the outside, ice conditions permitting. Note that the upper section of the gully, and therefore also the drip, receive the afternoon sun.
- Since the gully is extremely narrow, we recommend you don't climb the route if other parties are already climbing it so as to avoid being hit by falling ice.

COMMENTS for the route "Wait and Bleed"

No comments found for Wait and Bleed