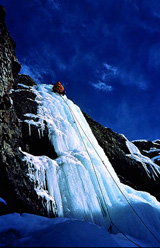 The walk-in is long but nevertheless well worth the effort: the climbing is splendid and relatively straightforward, set in a wild and isolated habitat. The icefall Bondì Ghibinet can be seen opposite, suspended in the upper section of a deep gulley (hydrographical right).

From the car park at the start of Val Viera walk up the valley along the river bed, crossing the river from time to time, to where the valley turns east (1 hour). Continue past Val Rossa and the rocky wall and first icefall (Shining Ice 95) on the right (hydrographical left). Continue on up to reach Red Bull, easily recognizable thanks to the three stepped sheets, interrupted by a series of easier angled sections. Ascend the steep gully past iced pine trees (2 hours).

COMMENTS for the route "Red Bull"

No comments found for Red Bull