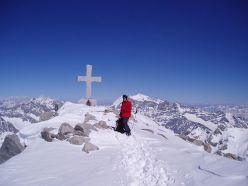 Dragging a 6000kg 149/G cannon from Temù, located at circa 1000m altitude, to Cresta Croce above 3000m: this was an undertaking which had never been achieved previously. Few thought that this task was feasible, but in 1916 the Italian troops managed the impossible. This easy outing at altitude follows a spectacular ridge which offers breathtaking 360° views onto Presanella, Adamello and the Brenta group to reach this cannon, nicknamed the Hippopotamus, and the summit of Cresta Croce at 3276m.

Rifugio Città di Trento - Rifugio Caduti dell’Adamello
After breakfast, head towards the Vedretta del Mandrone, part of the Pian di Neve glacier, the largest in the Italian Alps. The scenery is unique: a desert made of ice, crevasses, icefalls, streams, peaks and ridges surround us for kilometres and kilometres.

Continue up hill on the icy terrain towards the Caduti all’Adamello hut (3040 metres) from where one can admire a 360° view of the Adamello mountains. Leave some of our equipment at the hut for the night, and after some refurbishment, head to Cresta Croce (3276 metres) where one can visit the Cannon 149G that was positioned here by the Italians during the First World War. Return to the recently renovated hut in time to enjoy a beer while watching the sun set over the ice field.

COMMENTS for the route "Cresta Croce"

No comments found for Cresta Croce