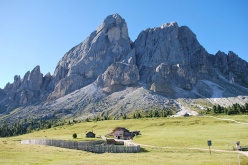 From Bolzano take the A22 towards Brenner, exit at Chiusa - Val Gardena, then drive up Val di Funes via the SP163 to Würzjoch / Passo delle Erbe (2008m). Alternatively, from San Martino in Val Badia follow the SP 29 to the pass. Park here.

From Würzjoch follow the obvious path #8a which leads in about 20 minutes to the picturesque mountain hut "Munt de Fornella" (2067m) directly below the beautiful North Face of Peitlerkofel.

From here continue leftwards following the path #8b that leads east, at first through the woods to the hut Ütia Göma, then slightly uphill past beautiful meadows to the the Göma col (circa 1 hour 20 minutes from Würzjoch). From here the view onto Val Badia, protected by Sass de la Crusc, is splendid.

Now the path #35 leads easily to undulating and amazingly kept "prati del Putiax" alpine meadows and the Ütia Vaciara hut below the south face of Peitlerkofel. Path #35 begins to ascend more steeply and joins #4. Take this to reach the Forcella Putia col (2357m). This is where the normal route leads to the summit of Peitlerkofel, but the circular walk continues by descending steeply down the scree filled gorge along path #4 before reaching the Günther Messner Steig and path #8a.

You need to pay to part the car park at Würzjoch / Passo delle Erbe. It is often extremely crowded and therefore highly recommended you arrive early.