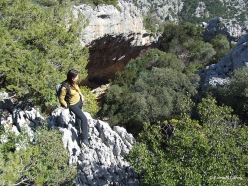 The walk to the doline and remains of the villages of Tiscali only takes a couple of hours, but the environment is quite wild and as of today the route is not marked. This means that it is not an easy walk for those not used to walking in the Supramonte.

Tiscali is one of the most popular destinations for walkers in Sardinia but this walk is perhaps the one for which – maybe because people often don’t have a good description of the route – the Mountain Rescue most often has to look for people who have got lost.

Leave the Strada Provinciale 46 Oliena-Dorgali at km 5,8 (about 5 km from Oliena and 14 km from Dorgali – signs for “ Valle di Lanaitto”) and follow the tarmaced road which after 2,4 km brings you to the parking place of the Su Gologone spring. 100 metres earlier you take the turnoff to the right (signs for “Località Turistica Lanaitto”). You follow this road into the Lanaitto valley for a total of 8 km. You ignore small secondary turnoffs and need to pay attention at the following junctions: after 4,4 km keep left at a “Y” junction; 2,2 km later keep left and 1 km further on (still on the main unmade track) left again, then in 300 metres you arrive at a large parking place (altitude 180 m amsl).

From the lay-by at which you park, several different branches of paths all run into an unmade track which climbs uphill (drivable only in a 4x4) which you follow on foot. This track climbs continuously, with the odd zigzag, heading mainly SW. In about 20’ you come to a clearing where the track finishes and you proceed on a path for another 20 minutes, until you leave it to follow a faint path on the left that climbs steeply (numerous cairns). Along this path on the left, ever steeper and rougher, there are some triangular red waymarkings and others, faded, white/red.
At the top of the climb you come to below a rock face where, following the waymarkings and with the path now more evident, you go through a narrow cleft.
According to legend,  this narrow passage enabled the inhabitants of Tiscali to easily defend the approach to their village.
After the cleft you proceed on a broad rocky ramp which now heads north. After about 1h30’ from the start, the path goes along the edge of the doline inside of which is the village of Tiscali. The path follows the edge clockwise until reaching the only point where you can go inside the doline to the remains of the village (altitude 425 m amsl – 1h45’).

To return to the starting point without having to retrace the same path, it’s possible to go back along a variant which crosses the crest (Curtigia di Tiscali) onto the other side. After having visited the village and having come out of the doline, you proceed NE for less than 100 metres, until you find a faint path which completes a tight hairpin bend and descends rapidly to the SE. After 20 minutes’ descent you come to a first junction where you ignore the branch to the right (in actual fact, rather hard to see – altitude 305 m amsl) to continue to descend towards the deep valley of the Doloverre di Surtana. Once you reach the valley, you ignore the path to the right and instead turn left to proceed northwards. The mule track, initially very good, gets gradually rougher and you often have to walk on the dry river bed. You can’t go wrong since there is only one path. Continue until where the high valley walls finish and the path, by now an unmade track, changes direction and turns to the left, towards the SW. Follow this track to the left for 500 m to return to the car.

The village of Tiscali was probably constructed during the late Nuragic period and consists of two different groups of dwellings: one of circular huts and the other of huts with four corners. The presence of the second set of dwellings indicates that the village was also used in a later period, probably until the Late Medieval period. Its location inside the doline and the system for gathering water dripping from stalactites lead one to think that the inhabitants could remain inside for long periods to ward off would-be attackers and that the site could have represented a defence against invaders in Roman times.

COMMENTS for the route "Tiscali - the Nuragic village"

No comments found for Tiscali - the Nuragic village 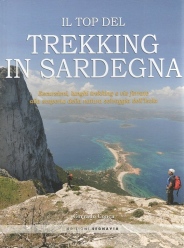