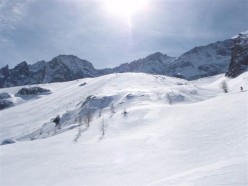 A unique place, never crowded and with heavenly snow. It's well-worth the effort skinning up 900m to then trace massive curves down some of the most beautiful snow in the entire Adamello group, and this itinerary is special due to its north-facing aspect, the fact that it is never too crowded and due to its microclimate. The surroundings are grandiose, set beneath the north faces of Busazza and Monte Cercen, wedged between two moraine crests which seem to indicate clearly which direction to head in. There is no summit to be reached, nor is there a precise target to head for, and at a certain point the way forward seems to be suddenly barred by two great rock bastions. But you're not here for a summit, you're here to enjoy everything else possible from a spectacular outing. Finding the right way in poor weather may prove difficult, and attention must be paid in the gullies and slopes in Val di San Giacomo.

Reach Paso del Tonale (1883m), leave the car in the car park at Telecabina Paradiso. Take the lift up and reach Passo Paradiso (2585m) in a mere 8 minutes, then take the chairlift Paradiso - Presena (2729m). After a good coffee at the Capanna hut, take the T-bar to the top of the Presena piste.

From the top of the lift, cross the barrier which cordons off the piste and, descending rightwards off-piste, enter the upper part of Val Presena (also called Cantiere). This section of the valley is wide meaning there is ample room to choose a good line, but keep as high as possible to cross the valley from left to right, traversing beneath the west face of Busazza. Try to lose as little altitude as possible and head to a rocky outcrop located at 2705m. Put your skins on here and continue upwards beneath the N Face of Busazza for circa 100m continuing east to reach a col. From here ski down the series of gullies and fun hillocks for circa 800m. When you reach the first larch trees put the climbing skins on once again and ascend first east, then NE towards Monte Cercen for circa 700m through the wild and solitary San Giacomo valley. Reach the steep and rocky North Face of Monte Cercen where the way onwards is barred. All that remains to do therefore is to take the skins off and enjoy the 1000m descent to the bottom of Val Presena. On the valley floor cross the wooden bridge, put the skins back on and ascend the gentle forest path back towards Passo del Tonale.

COMMENTS for the route "Ficazza"

No comments found for Ficazza