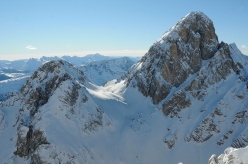 This is an interesting and not particularly demanding circular route. The ascent through the Val di Tasca is simple, and followed by a long, sunny descent back towards San Pellegrino. Spring snow conditions render this itinerary unforgettable.

Follow the road to Rifugio Fuciade (1892m) and from here continue to the Casoni di Valfredda (1908m) located immediately above. Continue up the valley to the left of River Zigole to then turn off left, when it gets somewhat steeper, to enter into the beautiful Val di Tasca (or 'Tas - Cia'). Ascend this, ignoring the slope on the right that leads up to Passo delle Cirelle (2683m). Just before the end of the valley climb up to the obvious col Forcella del Laghet, which separates Cima Uomo from Sasso di Tasca (2765m).

Descend south, down transformed snow. This fantastic descent is continuous but never too steep. Further down ski left, beneath the final rocky outcrops of Sasso di Tasca to then reach the beautiful valley and Col de le Salae (2227m) on the right. Reach the road that leads to Rifugio Fuciade and return along the ascent path.

Start early in spring as the snow transforms rapidly on south facing slopes.

COMMENTS for the route "Forcella Laghet"

No comments found for Forcella Laghet