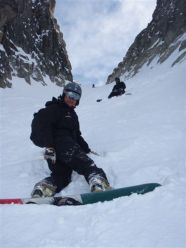 The name may arouse fear, but after a few “Paradisi”, no one fears the devil! I clearly remember the first time I descended this itinerary with Andreas Sarchi, whilst training to become a Mountain Guide. When we reached the col I looked down towards Tonale: it seemed extremely steep! Since then I've skied it hundreds of times, at times accompanying clients who've been off-piste skiing only twice in their lives, and I always smile down onto the slope which is now a part of me.

Car
From Trento - motorway A22 (Brennero/Modena) north towards the Brennero, exit at S.Michele all'Adige; continue along the SS43 towards Passo Tonale to the bridge at Mostizzolo (4 km after Cles), then turn onto the SS42 and continue to Passo Tonale (motorway - Passo Tonale 90km).
From Milan - motorway A4 (Milano/Venezia) east towards Venezia, exit at Ospitaletto; continue along the SP19 towards Valle Camonica, at Rodengo Saiano take the SP510 and continue to Piancamuno. From here take the SS42 towards Passo Tonale (Milano - Pontedilegno 180km).
Train
From Trento - take the train to Malè (Ferrovie Trento Malè), then continue by bus to Passo Tonale.
From Milano - take the train to Brescia (Ferrovie dello Stato), change here for Edolo (Ferrovie Nord di Milano). At Edolo continue by bus to Passo del Tonale.

At Paso del Tonale (1883m), park the car at Telecabina Paradiso. Take the fast lift which in a mere 8 minutes leads to Passo Paradiso 2585m.  From Passo Paradiso, ski down the Paradiso piste for a few meters, then immediately ascend the short slope on the right. From here make the long traverse left, taking care not to lose too much altitude to reach point immediately beneath the col. Take your skis or snowboard off and ascend the final 50m on foot to Passo del Diavolo (2431m).

The gully is fairly narrow at the start but after a few turns it widens. At the end of the gully ski down a very wide slope and let loose! When the slope narrows again you are faced with two options: either continue down the gully, a sort of half-pipe, or walk up the gully and exit left onto a wide open slope. Head towards the start of the  Paradiso chairlift, leaving fine turns between the green alder trees.

Beauty:
Skiing 5
Snowboard regular 3, goofy 4 due to the long traverse