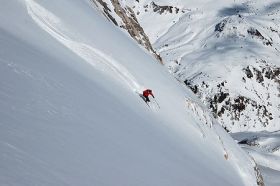 The "Queen of the Dolomites", rising gracefully up from the Fedaia Pass, impressively dominates above all the other mountains in the eastern Alps.

Its sunny South Face is a climbers paradise and its shadowy North Face is a dream for those in search of off-piste thrills, far away from the madding crowds.

Long after the snow has melted away in other resorts, skiers continue to revel in the white gold which remains on this glacier all year round.

Malga Ciapella is reached from the south by driving past Alleghe and Caprile or from the Val di Fassa by driving over the Fedaia Pass. A skibus operates in winter - consult the APT for up-to-date information.
The Marmolada pistes are connected to the Dolomiti Superski network (but not included in the lift pass which can be bought at a discount).

5. After having taken the Pian dei Fiacconi lift put on your snowshoes (or climbing skins) and begin to ascend diagonally towards the Gran Vernel to the bowl beneath the North Face of the Marmolada. Continue inside this and then ascend to the right where a steep section leads to the summit crest (crampons may be necessary in hard snow conditions). Follow the crest to reach the summit.

The descent follows the ascent route, but instead of returning to the Pian dei Fiacconi piste, continue off-piste and reach a narrow canyon which soon opens up to the slopes below. Keep to the right and descend next to the walls of the Col dei Boush. Pass directly underneath this and progress rightwards to arrive at the start of the lift. The traverse is both tiring and exposed: be particularly careful when the snow is crusty. Although this ascent is demanding, both physically and mentally, it is nevertheless extremely satisfying. It should only be undertaken when the snow conditions are perfect.

COMMENTS for the route "Punta Penia"

No comments found for Punta Penia 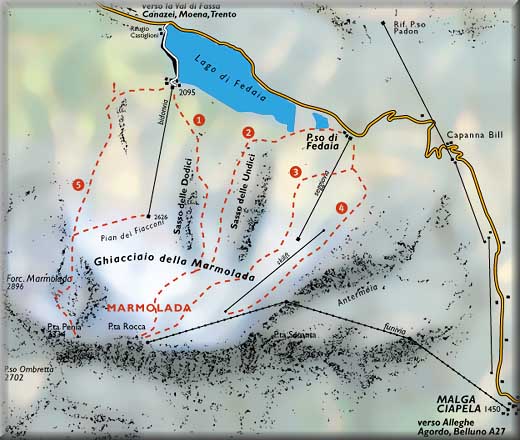