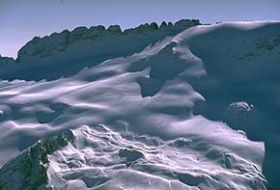 The "Queen of the Dolomites", rising gracefully up from the Fedaia Pass, impressively dominates above all the other mountains in the eastern Alps.

Its sunny South Face is a climbers paradise and its shadowy North Face is a dream for those in search of off-piste thrills, far away from the madding crowds.

Long after the snow has melted away in other resorts, skiers continue to revel in the white gold which remains on this glacier all year round.

Malga Ciapella is reached from the south by driving past Alleghe and Caprile or from the Val di Fassa by driving over the Fedaia Pass. A skibus operates in winter - consult the APT for up-to-date information.
The Marmolada pistes are connected to the Dolomiti Superski network (but not included in the lift pass which can be bought at a discount).

1. Lydia, to the dam
From the cable car at Punta Rocca descend leftwards, leaving the piste behind you to the right. A steeper slope leads to the wide descent gully where it is possible to ski freely in search of some perfect powder! The angle eases off lower down and the two immense rocky outcrops are soon reached. These tower over the otherwise featureless North Face of the Marmolada. Continue beneath the left-hand walls of the Sasso delle Dodici and then join the piste which leads to the dam. If no car has been left here prior to the descent, then you'll probably have to hitch a lift back to the Passo Fedaia (usually this isn't too difficult).

2. Lydia, returning to the pass
Follow the previous itinerary to where the slope steepens before the two rocky outcrops. This time descend hugging the right flank of the Sasso delle Undici. Traverse rightwards immediately beneath this, being careful not to lose any height and then continue rightwards down smallish gullies, choosing the best line to return to the Pass. This final part may be dangerous in unstable snow conditions. If this is the case it is worth descending to the lake and returning along the path on foot.

Those in search of peace and quiet will appreciate the Passo Fedaia Hotel or the Rifugio Marmolada, both situated at the top of the Fedaia Pass. The Tyrolia Hotel in Malga Ciapela or the quiet Bed and Breakfast La Montanara in Sottoguda are recommended, too. Don't forget to visit the waterfalls at the Serrai di Sottoguda, just a couple of minutes away. The Val di Fassa is much more lively and the nightlife is quite good. The Speck Keller, next to the ski school, is extremely popular and stays open till the early hours. Late nights usually mean late starts - don't forget though that the best snow can usually be found early in the morning!

Useful Information
This is in the eastern-most ski resort in the Alps, open during the summer as well since the pistes are on the glacier.
Freestyle lovers will be interested to know that a half pipe has now been created.
For the weather forecast and information about the snow conditions free-phone Meteo Arabba: 1678 60345/6
For detailed information about the lifts phone Funivie Marmolada: 0437 522984. The cable car does not operate in strong winds.

For further information consult the book "Le Nevi delle Dolomiti" Vol. 1, Edizioni Cierre. The Marmolada is depicted in the map Tabacco 1:25000 no. 6.

COMMENTS for the route "Lydia"

No comments found for Lydia 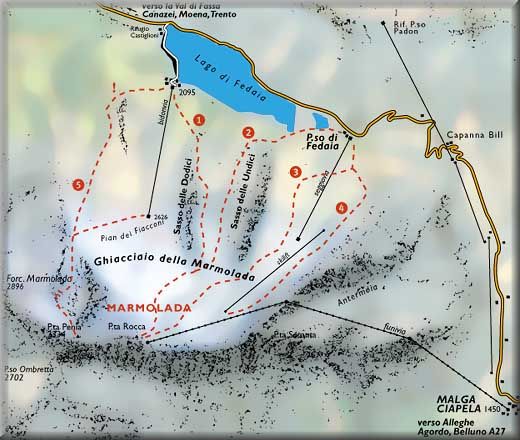