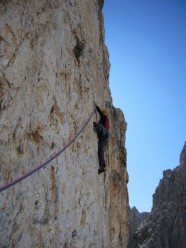 Elegant and beautiful route, exposed and with continuous difficulties.

From Fiera di Primiero ascend Val Canali to the hotel/restaurant La Ritonda, from here continue on foot for 1.5 hours along path #709 to reach Rifugio Pradidali (www.rifugiopradidali.it).

From Rifugio Pradidali ascend the Cima Canali normal route up the gully (30 minutes) to the base of Torre Gialla (cairn marker and green thread at the start of the route).

Abseil down the route (clip some bolts during the descent on the steepest pitches) or descend down the Torre Gialla Normal Route.

The route is dedicated to Alex Bettega, a 16-year-old who left us prematurely a short while ago. He really loved climbing and the mountains  in his backyard. Ciao Alex.
Riccardo and Luca

COMMENTS for the route "Skyluke for Alex"

21-09-2013, robert roithinger
fine line up the pillar, well done with some courage. but that is not a 5 star route compared to a lot of others we have done so far in the dolos. therefore we give it only 3 stars due to quite a lot of loose stuff, although most are small things you can easily take a fall with a flake or a crumbling pocket or so. grading o.k. but on the soft side. done o.s. by reini and me last week. 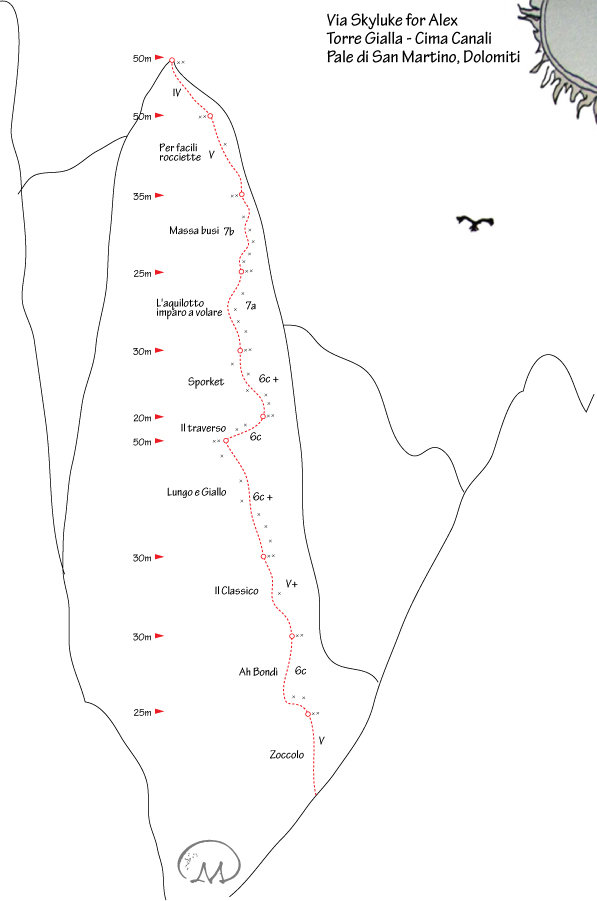