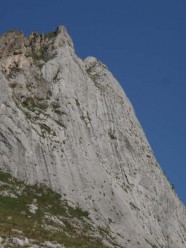 The most popular route on the crag and a great introduction to typical Picos climbing.  The difficulties are mostly low down, but a good eye for route finding is needed to keep you on track!

Reach the village Sotres in the NE corner of the Picos de Europa National Park. The crag is situated high above the Duje valley, just below the village of Sotres.  On joining the dirt road from the Sotres, the huge slab is unmissable from the road on the right hand side.

From the dirt road, cross the stream (usually dry) in the bottom of the Duje Valley.  About 45 minutes up the grassy slopes should see you at the base of the climb.

The route is equiped for abseil descent.

A full mountain rack is suggested.  There are some bolts (but often only a couple per pitch) so its reassuring to be able to place some gear of your own.  The belays are bolted though.

The main difficulties are confined to the lower few pitches, but the sense of exposure soon makes up for this!