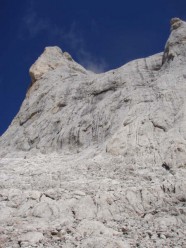 The most popular route on Naranjo de Bulnes.  This, the original line of ascent, provides a classic outing on good rock in some stunning positions.  A steep but well protected start gradually eases off to more slabby rock that decreases with difficulty as height is gained.

Refuge Urriellu (1950m) is the best base for all climbing on Naranjo de Bulnes.  It is reached either from Fuente De cable car in about 3 and a half hours, or from the village of Sotres in slightly less time, but with slightly more height gain.  Those with older cars, may be able to ‘bounce’ their way slightly higher up the track to reduce the walk in though!

From the Refuge Urriellu follow the small path that traverses around the North East Spur of the Tower and up into the ‘Canal de la Celada’.  Follow the cairns up steeper slopes then traverse South East to arrive at the ‘Col de la Celada’.  This takes about 1 hour from the Hut and gives some amazing views of the East Face.

The route is well equipped belays with new abseil rings as it is also used as the main descent route from the summit.  En-route, there are a few pegs and the odd bolt, but a normal sized rack (including some cams) will suffice.

The main difficulties are confined to the lower few pitches.  Some may chose to scramble without the rope on the upper section.