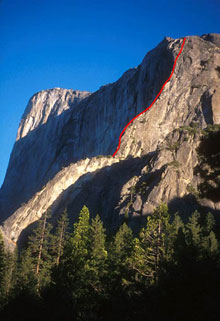 The thought of climbing El Capitan conjures fear, doubt and excitement. The East Buttress of El Capitan has the potential to spawn all these emotions with far less commitment than a Grade VI nail-up. The route is a good step up in difficulty from the East Buttress of Middle Cathedral. Many pitches have amazing exposure-some relatively easy and others relatively hard-providing an up-close example of the awesome presence of El Cap. These combined qualities will give the climber a well-deserved sense of accomplishment upon completion. Steve Roper provides the history: "One can argue that the east buttress is not really an El Cap climb. It's certainly not a 'big-wall' El Cap climb. The first ascentionists, in fact, never regarded their line as 'climbing El Cap,' knowing that the real challenge began just a few yards left of their route. But most climbers feel it certainly merits an El Cap designation, though few bragging rights adhere. "Exhilarated by his Sentinel and Yosemite Point Buttress first ascents, Berkeley climber Allen Steck soon turned to yet another project, this one in the El Cap area. The main face of the monolith was out of the question: too enormous and steep. But the beautiful black-and-gold buttress on the far eastern flank showed distinct cracks and chimneys on its lower section. Higher, the prospective route blended smoothly into the wall, but here also the rock looked broken and perhaps climbable. In late October 1952, Steck teamed up with three old buddies, Bill Dunmire and the two Long brothers, Bill and Dick. Dunmire led off on mixed free and aid, but about 50 feet up an aid pin popped and Dunmire plunged. To everyone's horror, the next few pitons popped. It was Yosemite's first 'zipper' fall. Dunmire survived with only a bruised shoulder and minor blood loss. On another attempt, Steck and Willi Unsoeld were stopped by winds that brought a nearby waterfall in their direction. On his third attempt, Steck with Unsoeld, Bill Long and a new companion, Will Siri, finished the route over three basically uneventful days."

45 minute hike up Zodiac talus then traverse base all the way to a big drop off.

2.5 hours down the east ledges descent.

COMMENTS for the route "East Buttress"

No comments found for East Buttress