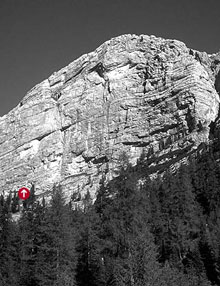 Beautiful route on solid rock up the left-hand side of the face. The 2nd and 5th pitches are outstanding.

From Cortina drive towards Dobbiaco along the SS51. After the small village Fiames turn left off the main road (signposted Val di Fanes - Trevenanzes). Park the car at the entrance to the park and continue on foot. Follow signs for Fanes, over several bridges and along the forest road. After a few bends the path straightens out and continues along the valley floor, past the Taé walls on the right, and then on to the Spalti di Col Becchei. The path forks at this point; go right over a small bridge onto the other side of the valley floor towards the Spalti. A cairn indicates a small path leading off rightwards through the wood steeply up to the rock face. To reach Illusione Ottica and Thriller scramble up the scree, traverse leftwards along an exposed section beneath a band of rock, and then return rightwards. The other routes are reached more easily by walking directly up to the base of the crag.

Approach the ledge from where Thriller and Balbic depart, described in the introduction. Scramble leftwards to the start in a niche (pegs visible on the lip of the overhang).

Either abseil down the route or walk leftwards to a fir tree where the abseil starts. All abseil belays are equipped with pegs and bolts (4 x 50m).

Although bolts and pegs protect the harder sections, bring a set of wires & friends for the easier pitches.

COMMENTS for the route "Illusione Ottica"