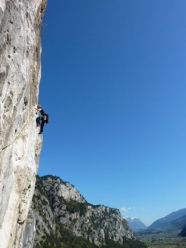 An absolute masterpiece, established over three days in September 1983 by Manolo and Roberto Bassi by abseiling in from above by, via Zanzara e Labbradoro is perhaps the most sought-after multi-pitch sport climb in Arco and the entire Sarca Valley. The route offers technical climbing up exceptional rock and climbs the stunning white pillar that dominates the East Fall of Monte Colodri. For many years this climb was considered an important reference route and despite its age it has lost none of its appeal.

After an easy start the third pitch checks in at 7a+, the climb’s technical crux. This is followed by an exposed sideways traverse, graded 6c, which should not be underestimated, and nor should the next 7a pitch. After this blazing start the intensity drops, at least, on paper, but climbing all the remaining pitches free all the way from the half-height ledge to the summit requires plenty of stamina and concentration.

From Arco reach the swimming pool at Prabi, the scramble through the wood to the base of the face. The route starts on a dirty slab to the right of the route DDT.

From the summit follow signs towards Arco and then descend down the Via Ferrata, or continue easily on towards Laghel, scrambling down the slabs to reach Arco's historic town centre.

Due to its popularity the lower section of the route is somewhat polished. But not excessively so and this takes nothign away from the overall experience of repeating this classic climb. 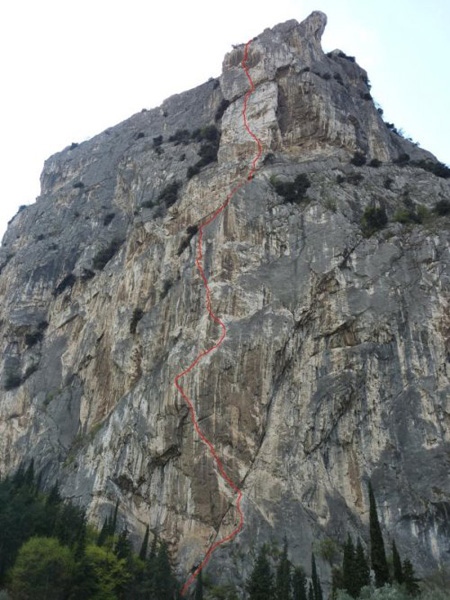 Monte Colodri receives the sun until 13.00. Best times of year spring or autumn.