Climbing which is not particularly homogeneous but nevertheless with some interesting pitches. Breaching the overhangs is spectacular and very physical up beautiful rock. The final pitch, up rough granite, is a must despite being psychologically demanding. From the penultimate pitch traverse right onto the arete.

Follow the approach for the nerby routes Haddad and Omerta, described in the guidebook (45 minutes).

Abseil as follows: two abseils off the summit to reach the third belay on the lip of the overhangs. From here a 60m abseil leads through the void onto the ground.

Bolts have only been placed in sections which are otherwise unprotectable. A set of camming devices is necessary (Totem highly recommended as they adapt well to rounded cracks), slings and kevlar threads, two 60m ropes.

COMMENTS for the route "Vecchia Felpa"

No comments found for Vecchia Felpa 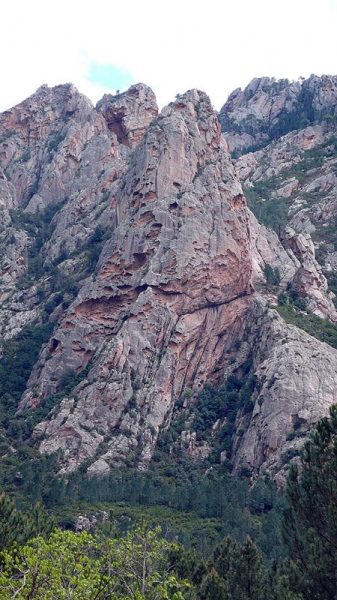