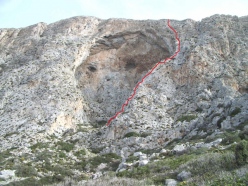 Fantastic multi-pitch sport climb established by the Swiss climbers Urs Odermatt and Peter Keller in April 2008 immediately to the right of the massive roof, also known as The Sleeping Princess Cave. This "plaisir" outing was the first route up the wall and although it tackles some extremely exposed climbing on the upper section, it surprisingly never exceeds 5c!

From Kalymnos reach Telendos. From the village follow the trail to Crystal Cave (1,5 hours). Alternatively, you can take a boat to the nearest point below the cliff and walk straight uphill for ‘only’ 30 minutes. To hire a boat call Captain Yiannis (tel. +30-694-481-9073).

The route starts circa 250m to the right of Wild Country.

Anywhere between 1 hour and an all-night epic! After you complete the route, keep walking until you reach the highest point of the island. Descend from the other side (north), passing by the chapel of Agios Konstantinos. Follow the cairns at first; then, at the chapel, the trail becomes clearer as it leads back to the village of Telendos. Alternatively, you can ask Captain Yiannis ahead of time when he will be making the Telendos – Irox route, and catch the boat on its way back (usually at 17:00 or 19:00, but best to check with him; for his number, see above)

COMMENTS for the route "Wings for Life"

No comments found for Wings for Life 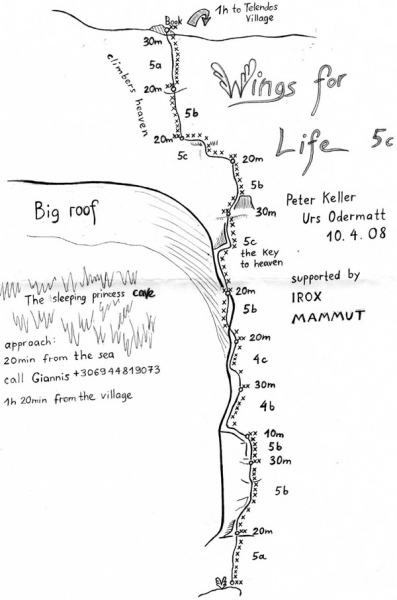