An absolutely unique route because of its setting, the quality of the rock, but above all because I had never come across such contained difficulties on an overhang as big as this one. The route overhangs almost 60m with difficulties in the region of 7a+/7b. It's a spectacular journey which many will be able to undertake and which alone justifies a trip all the way to Palermo.

From (Mondello) Palermo reach the Addaura quarter, park at the end of Via Annone where the tarmac road ends. Via Annone can be reached via the main seaside road or easily from viale Regina Margherita, from Via Monte Ercta, the road which leads to the Santa Rosalia sanctuary on Monte Pellegrino. After the first hairpin bend continue for circa 1 km and turn off left and descend into Via Annone.

Abseil descent not recommended unless very experienced with complicated rope manoeuvres. Two options recommended:
1) when you reach the summit meadow continue straight upwards towards the wood, reach the road which leads to Mondello and descend on foot, hitchhike or take the bus. 45 minutes on foot if the bus doesn't come...
2) from the meadow traverse along the lip of the roof right (left looking out to sea) for circa 200m and join the path with red markers. This leads to the scree slope at base of the wall with some grade II scrambles. From here make your way through the shrub to the car. This isn't difficult but the vegetation is thick, slippery and thorny. 40 minutes.

To descend to the base after the second pitch either you need a rope for an 80m abseil down into the void or you need to down climb. Take particular care when doing this. 10 quickdraws, slings and kevlar threads for the threads and stalactites. Prussik loops in case either the leader or second falls. 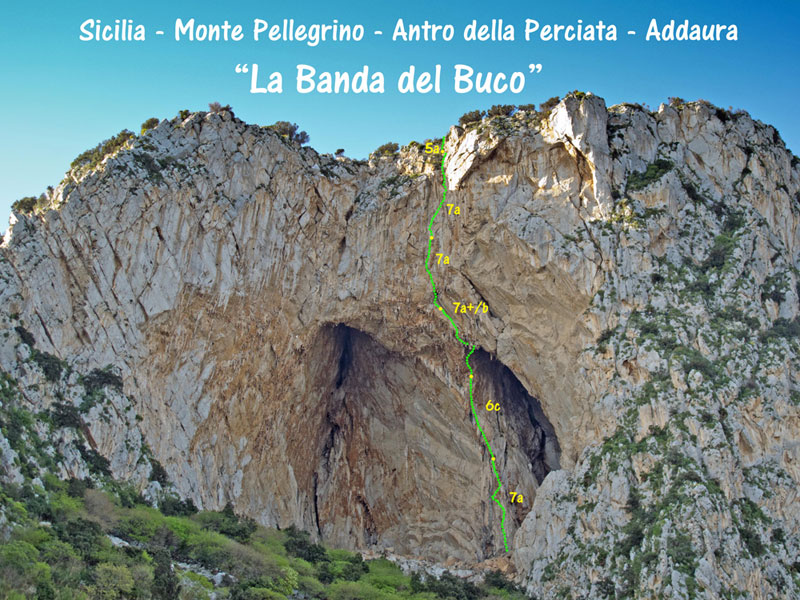