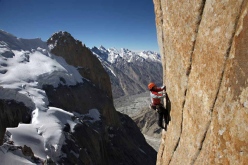 Eternal Flame is a world-famous multi-pitch route up the Nameless Tower in the famous granite Trango group in Pakistan's Karakorum mountain range. It was established in 1989 by an extremely strong German team comprised of Kurt Albert, Wolfgang Güllich, Christof Stiegler and Milan Sykora and after an immense effort at over 6000m they four graded the masterpiece VI, 7b+, A2. The route pioneered new difficulties in Himalayan climbing and indicated what could be achieved in the future.

The route captured the world's imagination and over the last two decades many of the world's best have tried their luck at freeing the line, but all ground to a halt due to prohibitive weather conditions combined with the extreme difficulties at altitude. Significant steps forward were made by Denis Burdet, Nicolas Zambretti and Toni Arbones who freed two of the four aid pitches in 2003, while two years later the Spanish brothers Iker and Eneko Pou climbed a variation to the 10th pitch, paving the way to an all free ascent, but due to bad weather they were unable to go for the redpoint.

The first free ascent was carried out by the German brother Thomas and Alexander Huber during an unprecedented spell of good weather in August 2009. The pair climbed in nigh perfect conditions and added 4 pitch variations to the line, which now goes free at 7c+. After his success Alexander commented: "There's no doubt we were extremely lucky. To be successful, so many different things have to fall into place. The weather was great which meant we could climb perfectly, up the cracks which were free of ice. I take my hat off to the achievement and free climbing instinct of the first ascenders. This route is a true enrichment for mountaineering. With "Eternal Flame" Kurt Albert, Wolfgang Güllich, Christof Stiegler and Milan Sykora have passed on the best and most beautiful free climb on the globe. We are thrilled that we could play a little part in developing this route!"

COMMENTS for the route "Eternal Flame"

No comments found for Eternal Flame 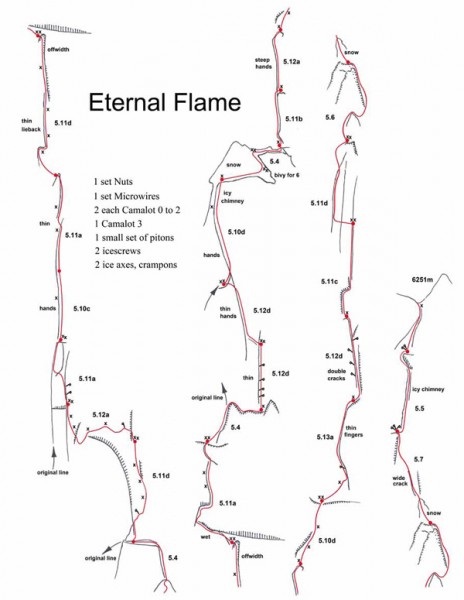