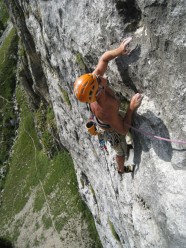 Stupendous combination of two existing routes which had fallen into disuse, probably due to the state of the original pro. The first half climbs technical slabs, the second is more athletic up excellent rock. Re-equipped in summer 2009, the route is well protected but the bolts are at times run-out.

From the car park walk up the path which leads to the base of the mountain. The route is located in the middle of the face, 4m to the right of Via Roberta ("BH" written at the base). As you walk towards the face, aim for the horizontal roof 50m above the base.

Abseil down the route or walk down via the ledge Cengia dei Camosci.

Rebolted by Alberto De Giuli, Renato Bernard (G.G.A.A.) and Andrea Gabrielli in summer 2009. Thanks to Val di Fassa Climbing for having provided the gear.

12-09-2011, Swen Harald
Very nice route. The best pitches are p1 and p4. - very technical and sustained slabs. The upper part was a little bit dirty - earth/dirt in most of the holds. The upper part of the route is also very different from the bottom part. We found the climbing on the easier pitches through the roofs quite tough for the grade. The 8th pitch has a line of bolts every meter but offers a free line by staying just right of the bolts. The roof provides the crux. The 9th pitch felt more like 7b+ to us.