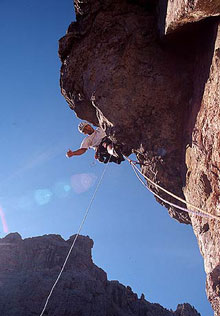 In mid-September the Italian Rolando Larcher 2002 made the first ascent of the "La Grande Onda - Big Wave". Located deep in the Dolomites on the Torre Sprit, this 500m route clocks in at 8a. According to Larcher this route represents a step forward with respect to many of his previous routes, for this line is characterised by long run outs, even after crux moves.

From Agordo drive to Sarasin (fr. Gosaldo) and turn off onto the tarmaked road for Faustin. Drive to the end of this road and park the car close to the forest track on the right with leads to Cas. Cavallera and the Menegazzi bivouac.

Ascend up to Cas. Cavallera and turn off right just before reaching it (50 minutes) for the nearby Biv. Menegazzi. Do not reach this, instead take the small track right towards cas. di Campo and Rifugio Scarpa. Descend down the meadows to the Sprit valley. The Sprit tower is on the right, and and enormous split boulder can be seen at its base on the left. Walk through the valley via the path and then ascend left uo to the tower, following kairn markers. Coast the base of the tower leftwards and ascend the gully for circa 40m to a thread which marks the start of the route (1950m). 1.45 hours from the car.