Beautiful route which climbs a line between the famous routes Brunsin and Plitschka up a repulsive yellow pillar past compact, overhanging virgin rock. The 6 pitches were equipped trad style. The belays are good with in-situ gear (in total 9 pegs at the belays) except for the second belay (just 1 peg) which can easily be backed-up with 2-3 Friends. Two pegs were placed along the pitches while the 5 threads were left in-situ. In general the route can be protected easily with friends except for the 5th pitch which breaches very compact rock; this is certainly the hardest both physically and psychologically. Climbers should be comfortable with these grades before repeating this route. The rock quality is magnificent throughout except for some sections and on the last pitch which still requires cleaning.

COMMENTS for the route "Via Africa" 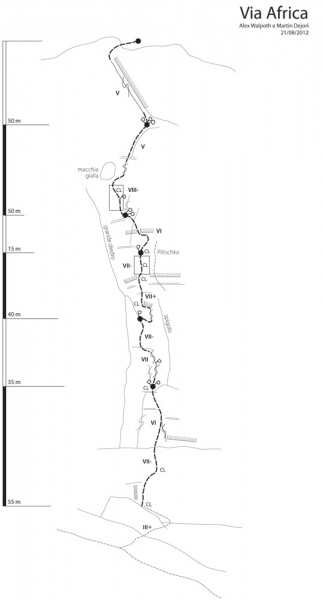