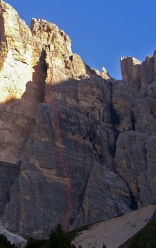 The 30-year-old and his girlfriend established the route over two weekends, chosing a line close (circa 10m) to "Aspettando la vetta", the route established by Massimo Da Pozzo and Giammario Meneghin in 2004. The new line crosses Aspettando on the third pitch and then breaks off left at the big roof. It was established ground-up except for the roof where Koren abseiled in and the distance between the bolts is, at times, fairly run out.

Drive to Rifugio Dibona, at the foot of the Tofana di Rozes. This is reached from Cotina by driving towards Passo Falzarego, past Pocol and few hairpin bends, and turning off right up onto the dirt track following signs for the refuge.

Approach this climb by walking up to the base of the pillar from Rifugio Dibona.

Traverse along the ledge towards the Punta Marietta buttress. Walk down the scree and ledges to the base of the buttress, and then walk around this on exposed terrain. Now descend past huge boulders to Rifugio Giussani.

Nuts and camming devices up to Camelot 2 are needed 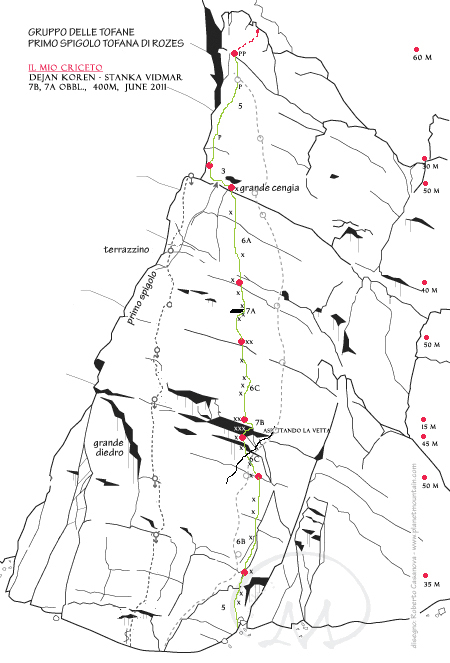