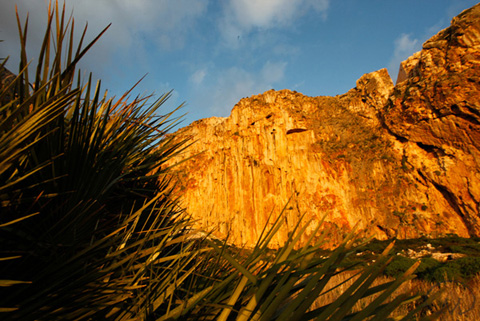 Located on the northwest tip of Sicily and a mere 500m from the seaside, the almost surreal Never Sleeping Wall was first developed in 2008 by British climber Jim Titt and a group of visiting Czech climbers and their Italian friends. Motivated by talk of fantastic limestone and further potential, in autumn 2009 a visiting group of Austrian climbers established a further set of routes, rendering the crag a little gem in the Mediterranean.

You need a fair while to take in the mighty limestone wall with its incredible tufas and streaked, grey and orange rock. At sunset the entire crag glows bright red and the atmosphere couldn't be more impressive when you climb one of the 50m routes at last light.

At present there are 14 routes, from 5b to 8a+, with Tears of Freedom ranking as one of the most beautiful 7a+ in the world!

From San Vito lo Capo drive to Custonaci (circa 15km) and follow signs for "Grotta Mangiapane". Continue along the gravel track and park circa 200m past the cave. Walk to the crag in approximately 1 minute. 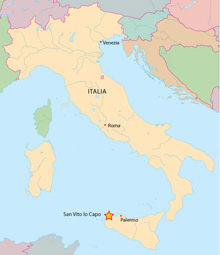