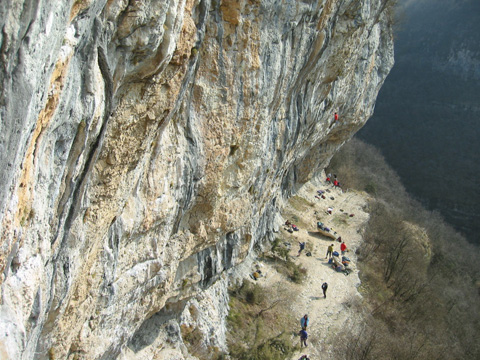 Ceredo is without doubt one of the most interesting and beautiful crags in the North of Italy. It lies just a few kilometers north of Verona and hosts more than 180 routes of all grades. The limestone is excellent and varies in angle from technical slabs and vertical faces to massively steep overhangs.

Ceredo, situated on the slopes of the Monti Lessini, can be reached from two directions. If you come from the west, east or south take the Milano-Venezia (A4) motorway and exit at Verona Est. Take the main road northwards towards Boscochiesanuova then drive past some small villages to Stallavena and follow the signs to Ebrezzo. The drive up into the foothills begins after the long valley and the villages Lugo and Bellori. Soon after, where the road forks for Ceredo and Fosse, turn left. Park the car on the left on the long, straight, uphill stretch of road after the hairpin bend. It can get extremely crowded at the weekends so don't take up more room than necessary.If you come from the north, drive down the Brennero (A22) motorway and exit at Ala-Avio. Continue south to Peri and drive up the windy road to the village of Fosse. From here descend for Grezzana and Verona. Park the car after about 6km on the right (see the instructions above for further details).From here walk up the path to the various sectors that remain slightly hidden from view because of the trees.

The routes are almost all extremely long and pumpy.

The pizzeria Gavinel in Ceredo (tel. 045/7535084) rents out rooms and there are other B&B's in the nearby villages. It is strictly forbidden to camp near the cliff. The area around Grezzana has some good pizzerias and trattorias, but if you are after something special then don't miss out on Verona.

The path leads directly to the first sector which has routes up to 6c. Mangiafuoco and the routes nearby are an excellent introduction to the crag. Continue rightwards for Settore Centrale and then the showpiece of this crag, Settore Strapiombi. Both these sectors are described in greater detail below.There are four other sectors further right still; the most interesting of these are Pec Blenda, an impressivly steep cave, and Tre amici, which has a number of routes up to 6c.All the routes (more than 180!) are superbly equipped with bolts and belay chains. Pay attention to the end of the rope when lowering off as many routes are longer than 25m and some are 30m or even more!This crag was discovered, cleaned, and bolted by a handfull of local climbers - all the credit goes to them.

A detailed guidebook can be bought at the pizzeria Gavinel in Ceredo. It covers all the sectors, not just those included below. The profits from this book are used to finance the bolting of the crag.

Spring and autumn, but not when it's hot or after extended periods of rain as the crag seeps. It is possible to climb in winter on clear, still days, but remember that the sun disappears early .The routes face SE to SW, depending on the sector.

A 70m rope is essential.

Excellent limestone with pockets, edges and many, many tufas.