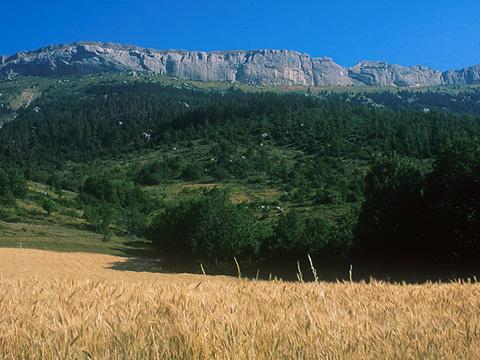 Céüse is widely considered one of the best crags in the world, and quite rightly so. Situated at an altitude of almost 1800m, this crag seems to have it all, from cutting edge sports routes to a plethora of easy multi-pitches. The best time of year to visit Céüse is from April to August. Perfect climbing conditions can be found not only during those rare sunny winter days with zero humidity and 100% friction, but also during summer heatwaves which render most cliffs in the South of France unclimbable. By changing sectors throughout the day it is infact possible to escape from the sun to the shade and a refreshingly cool breeze. No wonder therefore that Ceüse has become the number one holiday destination for so many climbers!

From Gap follow the signs to Veynes along the D994 to Fressinouse. From here take the D19 to Sigoyer. Drive through this village and turn right up towards Col du Guerins - continue until the road finishes at the parking lot. Two well-marked paths lead up to the base of the cliff. Either follow the path from the parking lot directly up or, far more pleasantly, gently stroll uphill on the path which starts from the curve below the bar. Both paths lead to the forest road at half-height and continue until they meet a path which runs perpendicular to the cliff. Turn right to get to Berlin or Demi Lune, or left to get to La Cascade.This is reached by a path which winds its way through some boulders up to the waterfall.The walk takes about 40 minutes; take your time, or you're bound to regret it the next day!

The climbing varies enormously from one sector to the next: climb up mega pumpy routes on huge pockets at La Cascade, get your arms blasted on the stamina routes at Berlin, or delight in the technical sequences at Demi Lune and Un pont sur l'infini. Ceüse has a reputation for the long run-outs between one bolt and the next, and these tend to incease the higher you get! Thankfully almost all the routes have recently been superbly re-equipped, so this "psychological factor" adds to the fun and excitement and makes the routes even more memorable!

Most climbers stay in the Les Guerins campsite as it's the closest to the cliff, run by a friendly couple who own the little bar at the end of the road, and cheap. More comfortable accommodation can be found either at the hotel Muret in Sigoyer or in one of the numerous "gites rureaux", such as Les Couleurs du temp (www.lescouleursdutemps.com). Food can be bought in Sigoyer or in Gap (14km away).

This covers not only Ceùse but also the other main cliffs Ventavon, Champsaur, Valgaudemar e Devoluy. It can be bought in Sigoyer or the campsite.