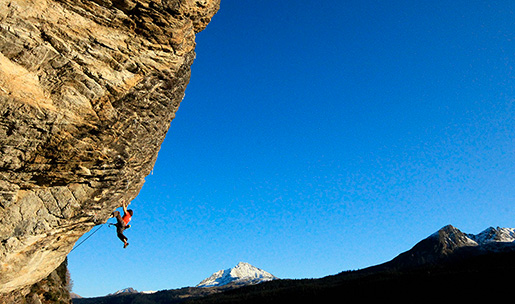 When the days get shorter and temperatures drop, the locals of Ratschings/Racines start warming up for the main season: the crag "Stohlwond" near Sterzing/Vipiteno is one of the most beautiful of Wipptal-Valley and is highly recommendable for warm days in autumn. Thanks to the southern orientation of the wall, it is possible to climb until November. There are numerous routes from the third to the tenth grade on a very beautiful rock.

Situated in an idyllic Alpine scenery, the climbing spot offers a fantastic view on already white peaks. In autumn and also in spring, one often shares the place with the native ibex. If you are lucky, you can even watch them walk over the slabby 5c-routes of the sector "Alpenzoo".

The classic sectors "Schweinebucht" and "Hennenloater" offer varied climbing on up to 35 meter long routes (5a to 8a). The classic "Is Weiße vom Speck" has been the first 8a of the area. Those who are looking for greater challenges have to make their way up to the sector "Bockhaus". The approach is relatively strenuous, but other than that, the climbing on 7a and 8b routes is very spectacular.

Arrival: Coming from north and south, take the A22 and exit for Sterzing/Vipiteno. From Sterzing/ Vipiteno drive in direction Ratschings (turn left at the locality Stanghe). Pass the skiing area Ratschings (Bichl) and continue in direction Flading. At first, the narrow road leads up steeply, then it descends again. Once arrived at the bottom, park the car just after the bridge on the left side.

Zustieg: Walk along the gravel road out of the valley. After five minutes, you will reach a branch-off. Turn left and continue shortly afterwards on a signposted path which leads through the forest to the wall (ten minutes). For the sectors “Alpenzoo”, “Schwert” and “Bockhaus” follow the trail which leads through sector “Hennenstoll” past the waterfall.