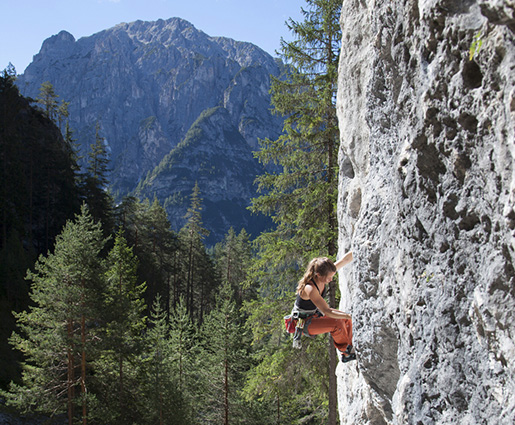 The Dolomites are known for being an incomparable paradise for climbers. One of the most beautiful crags is "Ciastlins", located just near San Vigilio di Marebbe in Val Badia. Especially now, in autumn, but also in spring, this spot offers ideal conditions for climbing. The lovely surroundings with a small brook make the crag a nice place to stay for families - adopting, of course, all necessary precautions, as we speak of outdoor environment.

Like many other climbing areas in the Dolomites, "Ciastlins" was equipped by Armin Craffonara, who has bolted an impressive 1000 routes to this day. There are six sectors with mostly long routes, offering climbing on crimps and pockets. You will find many routes in the lower and middle french grades. But there are also real challenges for those who are looking for something more demanding. Recently, Mark Oberlechner from Pustertal climbed "Poseidon" (8c), which at the moment is one of the most ambitious routes in South Tyrol.

Take the A22 leave the motorway in Vahrn/Varna for Val Pusteria. From San Lorenzo turn in the direction of Val Badia. In the locality of Longiarù turn left towards San Vigilio di Marebbe. In the center of San Vigilio follow the road to Pederü, passing up a football field as well as a guest house near a small lake. About 300 meters after the guesthouse you reach a small bridge, where it is possible to park. From the end of June until the beginning of September the road is a toll road starting from the guesthouse from 7:30 to 16:00.

Approach: From the parking lot a small trail leads up into the forest on the left side of the creek. After a few minutes you join a wider path which is followed to the right. This path will bring you directly to the wall in a few minutes’ walk.