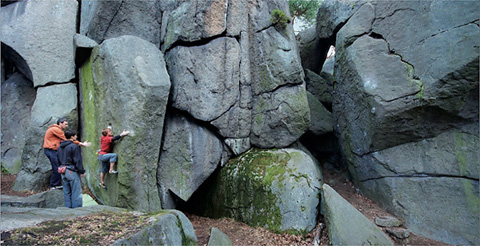 Petrohrad is the best bouldering area in the Czech Republic, situated 50km northwest of Plzen and 80 km west of Prague. Much like Fontainebleau, the area is divided up into many sub-areas, and offers thousands of problems and an enormous potential for the future.

At present there are circa 3000 boulder problems and since every week new ones are added, even the local climbers find it difficult to keep up with the development. The boulders are located in scenic natural surroundings, predominantly deep in the mysterious forest but some are also to be found in open fields surrounded by a wild, hilly landscape.

The boulders are comprised of a rough, often rounded granite which offers excellent friction. While the vast majority of problems are relatively easy, there are over 60 problems harder than Fb8A, with the hardest at present being Fb8b+. There is pretty much something for everyone and at the end of the day all climbers head to the village Petrohrad with its nice pub, good food and excellent beer...

Petrohrad is situated about 80km west of Prague. From Prague take the main road (toll route) no.6/E48 west towards Karlovy Vary and reach Petrohrad. Exit for the village and reach its center after 1.5km.

Wild camping is permitted at the Josemit area, otherwise head to the campsite in Jesenice.

This Central European PADani event is similar to the Italian Melloblocco meeting. The event takes place at the village Petrohrad (West Bohemia, located close to Prague) and officially starts at 10am on Saturday 25 April. Just like in previous years the two day session will be accompanied by parties and other side events.

This year the mysterious Petrohrad forest offer about 300 brand new boulder problems. The majority are stunningly beautiful lines – be prepared for some fairly highball problems. For ambitious boulderers there are about twenty 7C problems and about eight Fb8a's, one 8B and even one 8B+. But just like last year the organisation has focussed predominantly on easier problems, ensuring that those climbing Fb4, Fb5, and Fb6 will be happy. 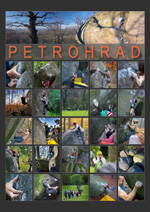 Climbing is possible all the year round. Although the area can be windy, most boulders are sheltered in the forest. After rainfall some rocks remain wet, so the wind is definitely appreciated. Some areas are excellent for hot days, too.