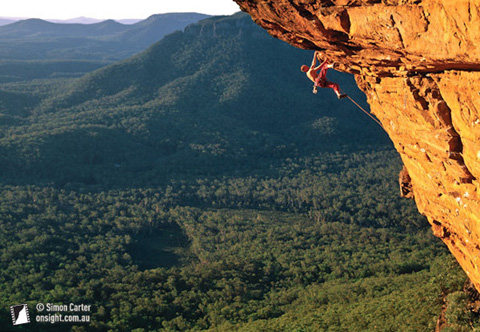 Australia may not have high mountains by world standards but you’d never know this in the undeniable ruggedness of the Blue Mountains. They are not a range of jagged peaks but an elevated plateau cut by deep valleys, canyons and gullies ringed by sandstone escarpments. They begin barely eighty kilometres from Sydney where Australia was first settled by Europeans in 1788, yet it took many serious attempts spanning decades before the first white explorers could find a way through to the country out west.

Climbers are lucky. Today a highway and railway cross the mountains making them an easy two hours from the city. For many there’s no need to commute as they live here instead. The tourist towns provide climbers’ essentials — such as bakeries, cafes, and good restaurants.

The Blueys are immense. You can climb virtually in suburban backyards — or begin a day of serious adventure in World Heritage wilderness just minutes after downing the morning’s latte. Some of the 2500+ routes are over three hundred metres but most are single-pitch. There are plenty of naturally protected routes but the Blue Mountains hosts a wide range of climbing styles and there are plentiful prime sport climbing crags here, some among the best in the land.

Diamond FallsOut of the two dozen or so Sport Climbing crags in the Blue Mountains, Diamond Falls is one of the most famous — not only because it is home to some of the best routes, but also because it’s here you’ll find some of the country’s hardest routes.

There are two main areas: Access Ledge and Mr Wall. The routes at the Access Ledge have a number of multi-pitch climbs requiring mixed gear, as well as a fine selection of sport routes. This area is a worthwhile destination in its own right. The immaculate Mr Wall is one of the jewels in the crown of Blue Mountains sports climbing. It is home to a high concentration of some of the hardest sports routes in the country. There is a fantastic selection of steep climbs "starting" from grade 26!

From Sydney drive to Katoomba via the Great Western Highway. Head down Katoomba Street towards Echo Point and turn right into Cliff Drive and follow the ‘Scenic Drive 5’ signs. Just past the Landslide Lookout, turn left onto the dirt road Glenraphael Drive which heads out along the Narrow Neck Plateau. Follow this for a couple of kilometers, up a steep concreted hill, then park when you reach the locked gate.

Climbing on the circa 2500 routes can be extremely varied, from single pitch and multi- pitch sports climbs to trad routes.

Nearby Katoomba and Blackheath offer all you need.


For further information check out www.onsight.com.au 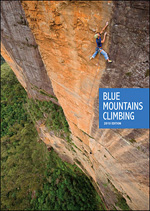 Climbing is possible year round except in the middle of winter - June, July and August - when it is normally too chilly except on the most unusually warm of days. In summer the sun hits the crag around 2pm. The crag also catches the wind and can get very cold so take some warm clothes even in summer.