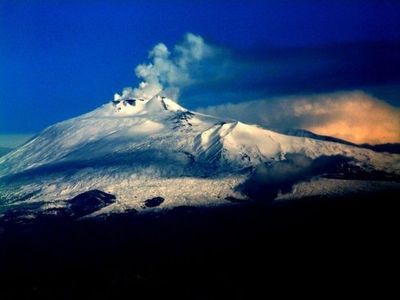 Whoever thinks about Sicily, he associates the mediterranean island with sun, heat, sandy beaches and oranges. If you like, you might get sun as well sand and oranges. But we offer you more. This trip leads you with the skis under your feet on top of Europeâs highest active volcano but also to the cultural and culinary highlights of Sicily.Â

The eastern part of the island is dominated by Mt. Etna, the fifth highest mountain in Italy. During the cold months, the winter covers the peak with a big white dress, which is attracting all kinds of winter sportsmen.Â

Skiing on Mt. Etna gives a unique and particular feeling, as the face of the mountain surprises with harmonized contrasts: the black lava, the white snow and the deep blue of the sea. Â

But at the end- and thatâs the nice part- the snow remains the second best, hereâs the icing on the cake, created with the best Sicilian ingredients: the typical countryhouse masseria built last century where weâll be hosted, the fantastic cooking of Signora Anna and the incredible hospitality of the family Tomaselli.

Find out more on www.mmove.net

All news by Mmove by Friends of Arco →