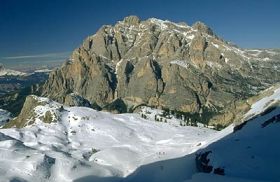 This is a beautiful outing thanks to the magnificent surroundings and the steep rock faces that tower high above. The imposing SW Face of Cima Scottoni dominates all: first climbed by the Scoiattoli L. Lacedelli, L. Ghedina and G. Lorenzi in 1952, their chosen direct line is still considered one of the most beautiful and demanding in the Dolomites. The three climbers needed two days to reach the summit, after having told their wives that they were just going to have a quick look at the wall. And would obviously be back in time for dinner…

Admire the incredible 360° panorama from Rifugio Lagazuoi and then walk down alongside the piste to the sign Armentarola – Capanna Alpina. Continue past this to reach the “Monte de Lagazuoi” plateau and then follow path no. 20 to descend slowly towards the imposing Cima Scottoni. Reach the end of the plateau, marked by the frozen lake “De le Lagacio”, after about 2 hours of easy walking. Pay particular attention when descending the long and steep gully that leads down to a beautiful wooden church, the only remains of an Austrian First World War cemetery. Walk past this and reach Rifugio Scotoni (1985m) shortly afterwards. After a well-earned rest (don’t miss out on some of the irresistible specialities) continue along the piste once again for about 150m to then turn off sharply rightly onto a path into the woods. This leads down through the forest to Rifugio Capanna Alpina (1720m) in about 1 hour.

From Rifugio Capanna Alpina take the shuttle service back to Passo Falzarego.

Only recommended in good weather conditions. The gully descent close to the "De le Lagacio" lake is demanding on hard packed or icy snow.