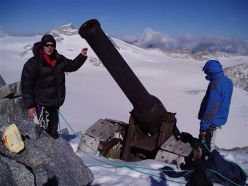 "It's an immense block of ice, big enough to provide material for half a dozen beautiful mountains. But it's just one. For many miles in both  length and width it never descends beneth 9500 feet (3078m)". This is how British alpinist Freshfield described the area in 1864 and despite the changes in the climate during the last 150 years, Pian di Neve remains the biggest glacier in Italy and, apart from its famous mountaineering outings, a fundamental water reserve for the North of Italy.

Rifugio Caduti dell’Adamello - Rifugio Garibaldi
Cross the Pian di Neve (“Snow Plain”) from east to west to raech Punta Venerocolo (3323 metres). This is the route that the Italian soldiers used to drag the cannon to its current position in one night. From the peak,  descend towards Lake Venerocolo at the foot of the massive Adamello North face. The Garibaldi hut (2550 metres) is located here and during the War this was part of an Italian military camp, placed here to defend the routes that crossed the glacier. A small chapel is all that remains of that period.