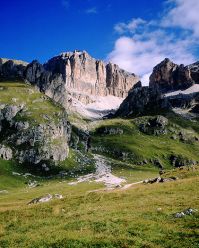 Piz Boé is the highest summit in the Sella group, the culminating point in this vast mountain chain which extends in the center of 4 passes and dominates from above the Val di Fassa, Val Gardena, Val Badia and naturally also Valle di Arabba.
It is considered the most popular "3000m peak" in the Dolomites thanks to its easy access (the Sass Pordoi cable car which avoids the tiring ascent) and the splendid panorama from its summit.

The Sella is surrounded by 4 mountain passes and can be reached from the North, South, East or West. The itineraries start from Passo Campolongo, Arabba and Passo Pordoi which can be reached from Val Badia, Val di Fassa and Livinallongo. Arabba is located centrally and as such is an ideal base for these outings.

Take the Pordoi cable car to 2239 m and walk NE along the easy path slightly downhill along the scree slopes to Forcella Pordoi. From here coast along the shoulder to reach the obvious fork which leads to either Rifugio Boé or Piz Boé (path no. 638). Take the latter right and ascend over stepped terrain to a steep and slippery section which is protected with a steel cable. Continue upwards to Capanna Fassa on the summit.

From the summit either return along the ascent path or head down north towards Rifugio Boé. Follow the ridge down past a final steep section which is held in place by large tree trunks. From the mountain hut return to the cable car along path No 627 which soon joins path No. 638 used earlier in the day.

Normal hiking gear. In some sections the path is equipped with cables.

This is an easy outing with relatively little height gain (350m) but at altitude (3000m).

From June to September; check the able car opening times

1.30 hours from the cable car to the summit of Piz Boé