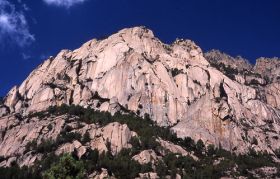 In the course of thousands of years the Purcaraccia river has sculpted a fascinating natural water park with a series of long waterfalls and enchanting pools. Ideal for canyoners and those in search of unspoilt nature, this walk will not disappoint.

From Col di Bavella descend towards Solenzara and park the car at Bocca di Laronu (12km beneath the pass).Return along the road for circa 200m to the hairpin bend. The path leads off from here (surprisingly it is not marked on the official map).

The itinerary begins by walking through a dense tunnel of shady trees for about 10 minutes, before opening up, turning north, and steeping. This disused forest track follows the Purcaraccia river to its head and, despite not being all too steep, is slippery and exposed at times. The river, just a few meters below to the left, forms a multitude of tempting pools but it’s worth resisting temptation and continuing on for another half an hour. Descend and cross the river, pass a granite face on the right and a small cave on the left to start ascending steeply on the right of the river. The Purcaraccia springs into view after roughly 20 minutes and on a hot summer day you’re bound to see plenty of people canyoning.
Advice: return to the right-hand side of the river and scramble upwards past the waterfall to reach the splendid pools and small waterfalls.

Return via the ascent path.

COMMENTS for the route "Purcaraccia waterfalls"