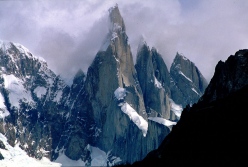 A straightforward trek with an excellent view over Cerro Torre. It can be extended to Mirador Maestri and this is best done by spending the night at Campamento Bridwell. This second option is however not described here.

El Chalten is the starting point for most treks in the Fitz Roy area. This is reached by a daily bus service in summer from El Calafate, over 200km away.

Leave El Chalten northwards along the RN23 and turn left off the main road at the large signpost to follow the obvious path over the first hillock and then on up westwards. This path is joined by another one from the left (this leads via the dam back down directly into El Chalten) before it continues on gently past a swamp and up through beech woodland to Mirador Laguna Torre in approx. 1 hr 1/4. From here it is possible to see Cerro Torre for the first time.

The path, now winding and beautiful, leads down onto the valley floor proper. Here it breaks up into many smaller trails, but all these lead to a signposted fork (the officially closed path that connects the Cerro Torre trek with that of Fitz Roy) after another 45 mins.

Continue on and bear down left to walk alongside Río Fitz Roy, coasting beneath a hill to reach Campamento Base Jim Bridwell after 30 - 40 mins. Cross the glacial rubble and up the slightly steeper lateral moraine wall that dams the Laguna Torre; enjoy the view north westwards over the impressive Cerro Torre and its neighbouring peaks.

Return along the approach route.

If this is done as a two day trek to Mirador Maestri, pitch the tent in Campamento Base Jim Bridwell and follow detailed trekking instructions the next day (see bibliography for guidebooks).

This trek is straightforward and in good conditions poses no serious problems.

Days required: it can be done as a day trek. Alternatively in two days if extended to Mirador Maestri and the night spent at Campamento Bridwell (no route description here, 19km). If this is done as a two day trek to Mirador Maestri, pitch the tent in Campamento Base Jim Bridwell and follow detailed trekking instructions the next day (see bibliography for guidebooks).

Canyoning descender for rope progression and emergency use....