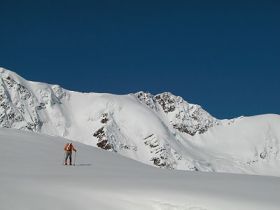 A great, long and highly satisfying ascent. One of the classic outings in the Cevedale group.

Rifugio Forni is the starting point for this ascent. From Bormio in Alta Valtellina (reach this from Sondrio in Lombardy or, for those coming from the Trentino, by crossing Passo dell'Aprica) continue up the valley to S. Caterina Valfurva and from here turn off left up the steep road to the mountain hut. Telephone prior to departure to check the road conditions on this final stretch.

From the car park at Rifugio dei Forni follow the road to the dam (hyrdrographic right). Cross this at its base and put your skis on the hydrographic left. Ascend the valley, either by traversing high or by ascending up the valley bottom. Continue past Rifugio Branca which is clearly visible on the opposite side of the valley to reach the base of the Forni glacier.
Continue upwards in the same direction and pass the large descent gully wide that descends from Pizzo S. Giacomo to reach the glacier proper. Continue on its right-hand side (hydrographic left) past a level plain. After this the line of ascents turns right and ascends the steep slope, weaving its way without difficulties past the large open crevasses. This section leads to the base of the wide glacial slopes at the base of the north face of S. Matteo. Ascend these slopes easily towards Cima S. Giacomo, next to Pizzo Tresero, the last summit on the crest which now springs into view. Ascend past the final few crevasses to the steep slope and climb this on the right to reach the crest that separates S. Giacomo and Pizzo Tresero. The ascent is airy at this point and the view sweeps down onto S. Caterina and the Forni valley. Ascend on the left of the crest to reach the base of the finishing slopes. The final section is fairly steep and after a few switchbacks leads to the summit crest. Follow this right to quickly reach the summit.

Return onto the crest and descend back down the initial slope, then descend left along the line of ascent or, conditions permitting, descend right down excellent angled slopes, past a small serac zone on the left. Reach the easy slopes halfway down the descent. Here too you can either descend rightwards along the line of ascent or directly left down into a wide gully. This weaves its way down past a series of smaller gullies and narrows half way through before leading down past a fantastic descent to the start of the Forni glacier and the line of ascent. Continue left to quickly reach the dam and Rifugio dei Forni.

COMMENTS for the route "Pizzo Tresero"

No comments found for Pizzo Tresero