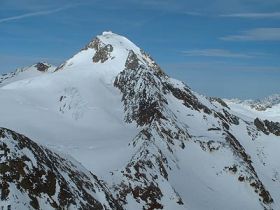 Great ski mountaineering itinerary that leads to the summit of the highest peak in Val Senales. This itinerary makes use of the 2 new chiarlifts resulting in a relatively straightforward ascent and an incredible 1800m descent to Maso Corto.

Val Senales can be easily reached from Bolzano by taking the SS38 west to Merano and continue for Naturno. Immediately after Naturno turn off right for Val Senales and, at the end of the valley, Maso Corto (Bolzano - Senales 60 km).

From Maso Corto take the 2 chairlifts to beneath the summit of Teufelsegg. Put on the climbing skins and ascend quickly to the obvious small col on the crest, from where an incredible view opens up onto Palla Bianca, Punta di Vallelunga, Hintereisferner and the Austrian ötztaler Alps. Take your skis off and rapidly on foot up the easy crest to the top of Teufelsegg. Snow conditions permitting ski down from here or descend on foot until you reach the first snow patches once more. Frem here descend diagonally, keeping high above the rocks to reach the glacier at 3000m. Ascend gently on the extreme left of the glacier towards the Hintereis Joch. Continue past the incumbent seracs and then climb up the slope that leads to the summit, easily at first, then more steeply towards the false summit. Take off your skis here and ascend on foot up the finishing rocky crest to quickly reach the summit.

Descend down the steep slope, paying particular attention when there is little snow, towards the summit of Sorgente di Fuori, passing the Hintereis Joch. Remain as high as possible and ski down the first of three gullies that lead down from the crest into Val delle Frane. Watch out for wind-swept accumulated snow. From here the Val delle Frane opens up, enabling a rapid, stepped descent. After skiing down the characteristic narrowing keep right to join up with the sledge piste which, in turn, leads to the ski piste and Maso Corto.


Variation: in recent years the descent into Val delle Frane via a small col on the crest that divides Hintereisferner from Val della Frane has become extremely popular. Descend as before, cross the Hintereis Joch and once at Hintereisferner keep up close to the rocky wall, continuing right to the only obvious weak point along the crest, close to the cairn. Take your skis off and scramble easily over the rocks to reach the other side. This itinerary is safer and less steep that the one described above, and the snow transforms earlier.

COMMENTS for the route "Palla Bianca"

No comments found for Palla Bianca

Fully waterproof rain jacket suitable for any hike in the...