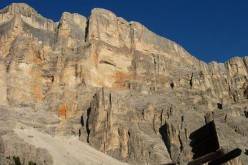 On 28 August 2008 Mountain Guide Nicola Tondini completed the first ascent of his "La perla preziosa" up the beautiful West Face of Sass dla Crusc in the heart of the Italian Dolomites. Tondini spent a total of five days completing the 375m line spread out over a two year period and in the company of first Sartori, then Zandegiacomo.

The new route explores unclimbed terrain right between the ultra classic Diedro Mayerl and Via Messner al Grande Muro and was, according to Tondini, his "dream to make the first ascent on the legendary Sass dla Crusc in trad style." The eigth pitches weigh in at a mightly IX+ (7c+) and apart from 2 bolts on the 6th pitch are portected with trad gear and pegs only. Tondini concludes "My dream was almost perfect. On the one hand I'm sorry about those two bolts, on the other I'm happy about the beauty of the route because 90% of the crxes on each pitch are obbligatory and were climbed free during the first ascent. I only used cliffs and hooks to place pegs and bolts. I think that this route can be highly satisfying for many of those strong climbers who roam the Dolomites in search of "trad" routes and excellent rock."

From Santa Croce (2045m), beneath Sass dla Crusc, follow path no. 7 that leads beneath the mountain past scree slopes and alpine meadows up to the ferrata. The path initially leads over scree to then climb up rightwards. Leave the path at this point following a track (cairn markers) up the long outcrop to the base of the wall proper. Various tracks lead to the route at this point: traverse left at the end over the final outcrop and scramble up scree towards the base of the large corner.
The route starts between "Diedro Mayerl" and "Messner al Grande Muro". Peg and cairn mark the start.

Note (1): all pegs have been left in-situ. Thetwo sets of camming devices (Camelot 0.5 - 3.0) are also needed for 3 belays which have excellent cracks and 1 peg at times. Check the topo for gear needed for each belay.
Note (2): the two bolts on the 6th pitch reduce the obligatory crux moves: the hardest sections (VIII+ obl.) are immediately before the first bolt and immediately after the second.
Thanks to Nepa climbing, Keyland, Ferrino (DMM and Edelweiss), Marmot 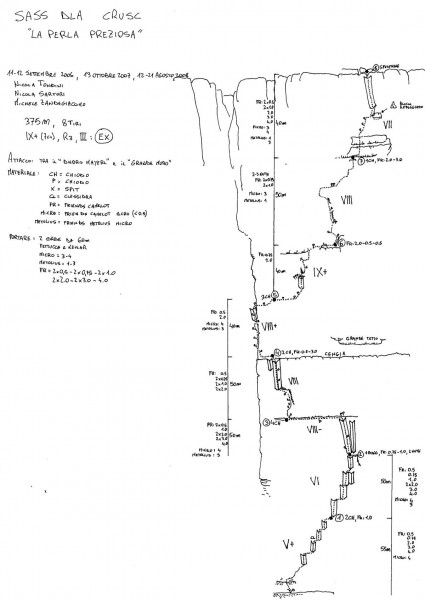