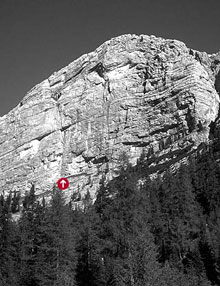 This route follows the large corner up the middle of the wall to the large roofs at half height. From here it continues leftwards, shares a belay with Thriller and Balbic and continues up slabs and cracks between the two. The first section up the corner is magnificent but beware of seepage after rain.

From Cortina drive towards Dobbiaco along the SS51. After the small village Fiames turn left off the main road (signposted Val di Fanes - Trevenanzes). Park the car at the entrance to the park and continue on foot. Follow signs for Fanes, over several bridges and along the forest road. After a few bends the path straightens out and continues along the valley floor, past the Taé walls on the right, and then on to the Spalti di Col Becchei. The path forks at this point; go right over a small bridge onto the other side of the valley floor towards the Spalti. A cairn indicates a small path leading off rightwards through the wood steeply up to the rock face. To reach Illusione Ottica and Thriller scramble up the scree, traverse leftwards along an exposed section beneath a band of rock, and then return rightwards. The other routes are reached more easily by walking directly up to the base of the crag. Taé’s routes are reached by crossing the bridge and briefly following the road, to then ascend the gully on the right. Reach the pine trees and then scramble up the ramp rightwards to the base of the wall.

Start beneath the corner.

As for Illusione Ottica and Thriller.

COMMENTS for the route "Los Angeles"