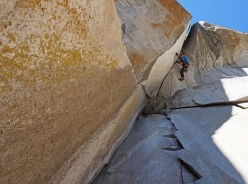 Astroman is one of Yosemite Valley’s legendary climbs and one of the most famous in the world. It is located on the East Face of Washington Column, way down in the valley, right in front of Half Dome.

From the valley floor follow signs for Mirror Lake, after the bridge abandon the path and scramble up through the forest until you reach an obvious track that leads to the base of the south face (20/30 minutes).

From where you unrope head rightwards (North) following the ridge along the unmarked trail. Do not go descend down to the right, but instead continue until it’s possible to descend down the East Face. Downclimb past an obvious tree, continue following the tracks to the gully, cross this and descend it on its left. After a hundred meters keep right on weathered grade II rock. Do not return to the base of the climb but instead continue down through forest path to reach the Mirror Lake trail and then the car park (1 hour/1:30 hours). Don’t underestimate the descent.

Almost the entire route needs protecting. Take three sets of camming devices from micro to 3BD. 2 4BD and 6BD, not indispensabile.
Ropes: many choose to climb with just one single rope and a haul-line to haul their backpacks. Alternatively use the classic two half-ropes. After the Harding Slot a descent becomes demanding and is not recommended. The route can be climbed in a single day by fast parties, but you need to start early and the weather shouldn’t be too hot (avoid summer). Alternatively, bivouac at the 7th belay or on the summit.

COMMENTS for the route "Astroman"

No comments found for Astroman 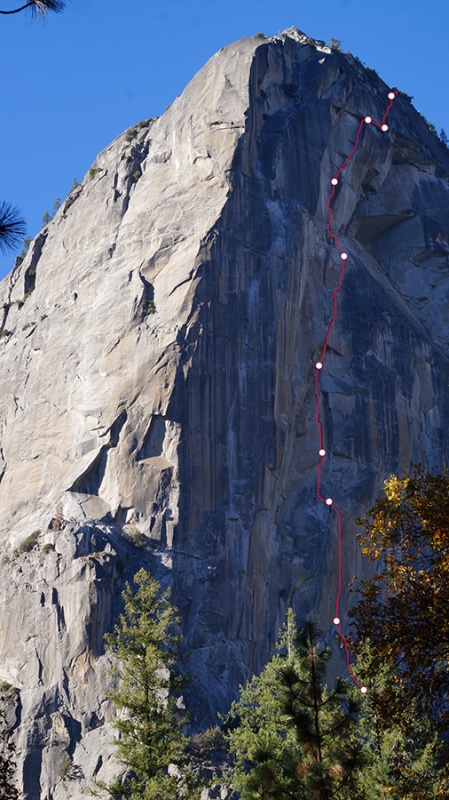 Sun in the morning