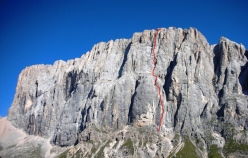 Bruderliebe was first ascended in summer 2011 by Hansjörg Auer together with his brother Vitus. Hansjörg described the route as follows: "Bruderliebe is 19 pitches long with difficulties up to 8b/8b+. I established it ground-up this summer together with my brother during a fantastic 8 day period. The route takes a line up the Ombretta, on the right-hand side of the Elephant's back, just to the right of '40 anni per il Falier'. It crosses 'Verena Vinus' on the belay after pitch four, and crosses 40 anni on the belay after pitch 6. The major difficulties are in the lower section where the rock is fantastic and after a couple of pitches up to 7c it culminates with the 50m crux pitch. The difficulties then ease off considerably and on the upper section the rock quality is no longer as outstanding."

Take the motorway A22 Modena-Brennero and exit, after Bolzano, at Ora. Drive up the Val di Fiemme to Predazzo, then up the Val di Fassa to Canazei. Continue on up to Passo Fedaia and then descend to Malga Ciapela.

From the car park at Malga Ciapela take path no. 610 to Rifugio Onorato Falier (2080m), nestled beneath the South Face of the Marmolada (1.15 hrs from Malga Ciapela). From Rif. Falier follow path no. 610, to the narrow hairpin bends where it points up to Passo d'Ombretta (west); traverse right (east) across alpine meadows upwards to a ramp that leads up the pedestal to the base of the routes.

COMMENTS for the route "Bruderliebe"

No comments found for Bruderliebe 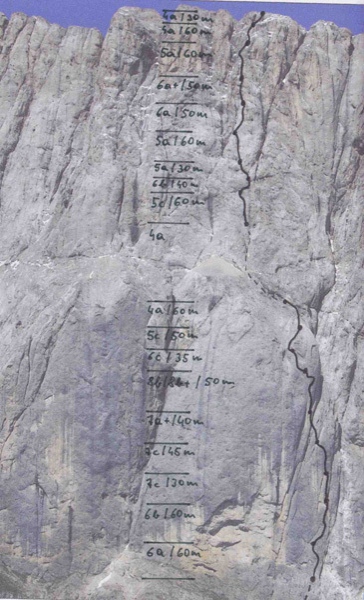