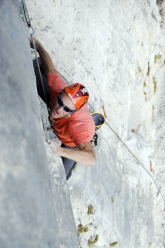 The route offers varied climbing up magnificent rock: a warm-up pitch up "coral-like" rock is followed by a very overhanging pitch with a no-hands rest at half-height and a hard fingery sequence to reach the belay. Pitch 3, after a just-off vertical section, offers technical slab climbing. Pitch 4 is the "work of art" offered to us by Val d'Adige: a first section up micro-pockets is followed by a Verdonesque limestone wave, with a series of slight overhangs and slabs climbed with a series of uniquely beautiful moves. This severe 8a+ pitch alone is worth the entire route, and it is followed by the "kick in the teeth" final 5th pitch: an intense boulder crux gives the pitch, and the route, its 8b grade.

Take the A22 Brennero - Verona motorway, exit at Affi, follow signs for Spiazzi (right at the first roundabout, left at the next turnoff. At Zuane (5.5 km) turn off right for Brentino-Trento. Take the state road for Rovereto-Trento and park the car shortly before the sign for Preabocco.

Abseil with an 80m rope or two half-ropes

The route was established ground-up with a strict ethic up fantastic rock, over a period of days using cliffhooks only to place the stainless steel bolts. Pro is run-out and the route is both physically and psychologically demanding. 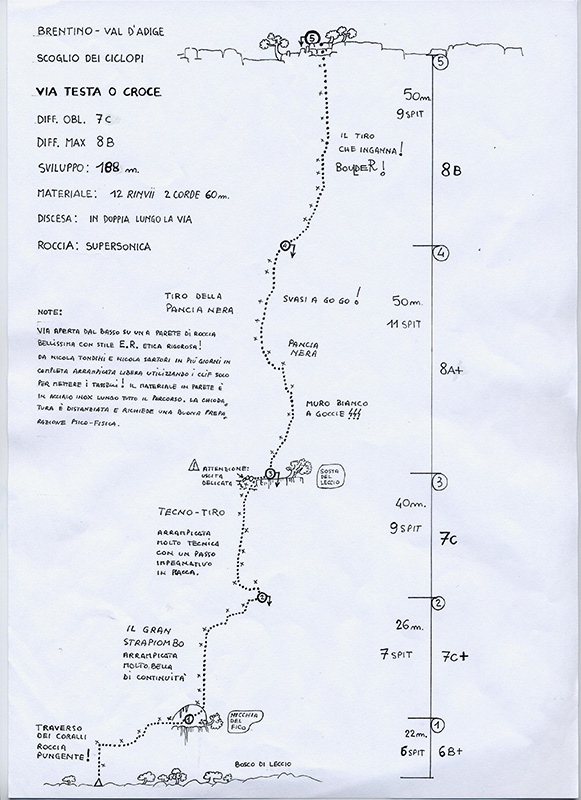