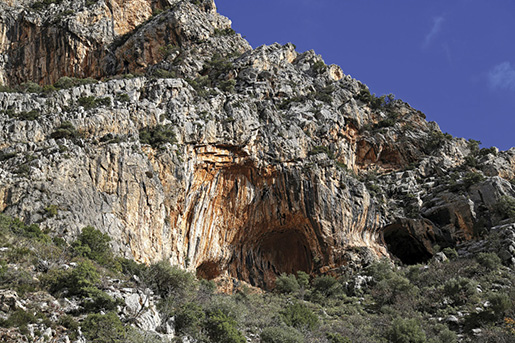 Leonidio is a beautiful Greek town about 3.5 hours from Athens, with about 6,000 inhabitants situated on the east coast of the Peloponnese in a valley at the foot of Mount Parnon. A breataking, 250m red limestone cliff towers above Leonidio and offers delightful climbing on excellent rock. Due to its mild temperatures, Leonidio is a great winter climbing destination.

Twin Caves is one of the best crags at Leonidio. The area is famous for its variety of routes, grades and also climbing styles, that range from tricky slabs, to vertical routes and pumpy overhangs past typical tufas. As the name suggests, the area is comprised of two caves. The first cave is the biggest and almost completely overshadows the second, smaller caves. The routes at Twin Caves are safely bolted and there is good parking. The approach is very short and the site below the crag is nicely arranged. As the crag is rather new and there is still some loose rock, a helmet is recommended.

Leonidio is situated 235 km - about 3.5 hours - from Athens. Starting from the Athens International Airport, take the Attiki Odos motorway towards Elefsina. Continue towards Korinthos. At the outskirts of Korinthos, turn onto the motorway towards Tripoli. Take the exit towards Argos and follow road signs to Argos. At the end of the village Argos, immediately after a big bridge, turn right to avoid the downtown area and follow signs for Leonidio. Pass the village of Myli and turn left approximately 1.8 km after Myli, following signs for Astros and Leonidio. This last section of the route is almost entirely along the scenic coast.

Twin Caves
From Leonidio drive towards Vaskina village. The road ascends past a series of hairpin turns. Park at the 9th hairpin turn, about 4.6 km from the main parking area of Leonidio (37.174851, 22.840928). Walk west along the dirt road for 150m, then follow the steep, rough path to the caves. The approach takes around 10 minutes.

No comments for Leonidio - Twin Caves 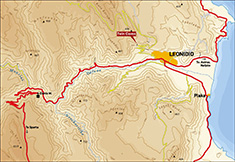