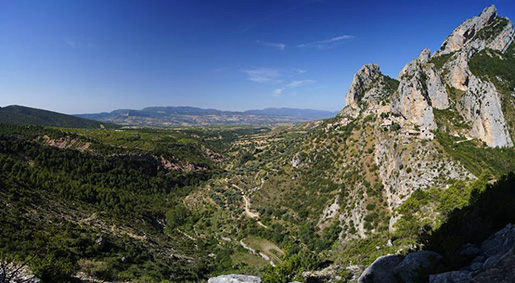 Catalunya is full of unknown climbing gems. Pete O’Donovan and Dani Andrada teamed up for the first & second edition of Lleida Climbs and this work helped expose a handful. Abella de la Conca is one of them. Situated in at the foot of the Carreu & Boumort Sierras, in one of Catalunya’s ‘most beautiful villages’ you can join the locals picking up water at the village fountain, admire the view, bathe in the canyon pools or visit the 11th century church with rare romantic paintings. On the cliff walls, a stone’s throw from the main square there are all grades to enjoy, in season mainly from September to June. Around 150 routes have been put up mainly by Pep Boixados (Rosso’ who runs Deu Dits Rocodromo in Barcelona) since 1985 and Gee since 2000 (climbcatalunya.com). Other routes were put up by Jordi Pou, who nearly single-handedly put Margalef on the climbing map. But Abella is not just about hard lines and offers lots of technical wall and slab climbing as 50% of the 200+ routes go from 3 to 6c!!

The only missing thing was a summer climbing sector. Throughout the year geologists from around Europe come to view the unique landscape formations surrounding the village. One of those, three successive tufa stuffed rock arches have given way to a new incredible summer sector that stays shaded pretty much all of the time and is blessed by the ambient cool air of 1100m altitude.

Climbers are not the first to inhabit this feature. It used to be an ideal hideaway for local young men from Franco’s army and its name, “El Forat dels LLadres” (The Robber’s Cave in Catalan) hints at even earlier occupations. Today the access is aided by a 35 meter via ferrata which can be found after a 15 min steep walk from the Costera sector. A good warm up, with beautiful views over the valley, the walk-in offers the sector a serenity and peace unknown to more roadside crags.

For all information on routes or access you can ask Nick Durand or Ella Moore who are setting up ecological refuge on the village square (facebook/abella.climb, opening 1st March 2014) and who maintain an up-to-date topo.

By car: from Barcelona take the A2, turn off on L303 to Agramunt, stop off to stock up on Turron, continue towards Artese de Segre, stop again in Catalunya's best bakery “Rosa Serra” and get yourself a giant Croissant for 3 euros!, continue to Isona, entering the village and turning off towards Col de Nargo onto L511. Follow the signs for Abella de la Conca. Park preferably at the entrance of the village avoiding the obvious tarmac area which is used by lorries to turn around as Abella’s road is a dead end.
By bus: from Barcelona to Isona daily buses (www.alsa.com). A pick up from Isona can be arranged for travellers staying at the eco refugio.
By train to Tremp or Cellers (Terradets). A pick up can be arranged on demand.

At the village eco refugio from 1st March 2014 (email: abellaclimb@gmail.com or facebook/abella.climb). This offers self catering accommodation (1 shared kitchen) and thus provides no food. All food supplies can be purchased from Isona (7km). All fields are privately owned and no free camping.

Lleida Climbs, 2nd Edition 2013 by Pete O’Donovan and Dani Andrada. For all information on new routes or access you can ask Nick or Ella in the village Refugio