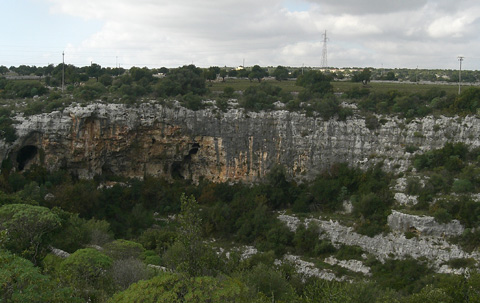 Pandora came to life in November 2009 thanks to an enthusiastic group of climbing friends. Given the wild nature of this little paradise covered in ivy we decided to work together to render it accessible. After a long period of deforestation and numerous discussions (fortunately always resolved in the best of all possible ways) we bolted this splendid limestone wall, and then decided to free the first routes. Slowly but surely the crag came to life and now offers far more routes than we had initially imagined.

The limestone rock face is circa 100m wide and is varies from slightly overhanging to steep, pumpy overhangs, reaching a maximum height of 25m in the central section. The names of the routes are written at the base and some routes require 13 quickdraws.

While adding the final touches to the crag our brother Gambino Calogero died in an accident on Mount Etna. Things have changed for all of us since then and at the base of the crag there is a plaque to honour our profound friendship.