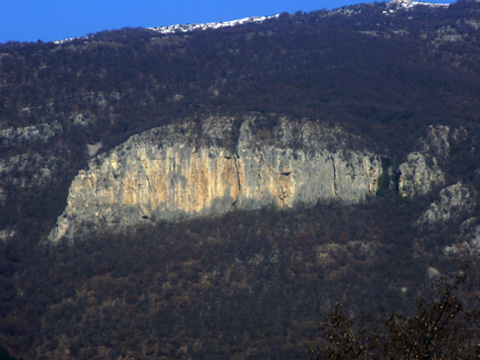 The impressive red outcrop Sengio Rosso appears in the distance like a shiny jewel, wedged into the green slopes of Monte Baldo and clearly visible from the plain below... fog and weather conditions permitting.

The motley coloured Sengio Rosso crag was one of the first to attract the climbing pioneers from the Verona Caprino area. Raised with the glacier-smooth grey and red limestone above their houses, at the end of the '70's calibre climbers such as Sergio Coltri and Carlo Laiti began to explore the most logical and natural lines, making the most of rudimental bolts and wire to equip the routes.

As climbing techniques evolved and these climbers gained experience, some of the most beautiful slabs in the Verona area were brought to life, including "La porta del buio", "Brena violenta" and the magnificent "Cura la carie" to name but three. Sengio Rosso then experienced a period of oblivion between the start of the '80's and the end of the '90's, but at the start of the new millennium it was rediscovered by Beppe Vidali, one of the most active local new routers.

Thanks to his tireless effort the crag was enriched with technical and highly aesthetic routes such as Fog", "Zenzero", "Tala Patagonica" and more recently "Orchis" and "50 e non sentirli", while the smoothest slabs were freed by the class climber Nicola Sartori. His lines "Wara Wara del sur", "Zaiss" and "La Bestiaccia" boast sinuous, technical moves and now the crag has come of age offering routes even harder than 8a.

No one could have imagined that one day these "youngsters" would have joined forced to promote the crag, write a guidebook (Tra il Lago e il Fiume, Cierre edizioni) and organised the first climbing meeting in the Caprino area: the Sengio Rosso Climbing Festival, scheduled for 9 April 2011.

Take the A22 motorway, exit at Affi and reach Caprino Veronese. From here continue towards Spiazzi and Ferrara di Monte Baldo. At Pazzon continue for another 1800m and then turn off left for Braga – Pradonego. Continue past Braghizzola and park close to small country road on the left (marker Cai 53 Piore – Lumini). Follow this road for 1500m almost to the start of the pine forest and take the path (yellow markers) on the left to the crag. The crag is 2/3 on private property and 1/3 on state property, so please treat the area with maximum respect.

The climbing at Sengio Rosso dates back to the '80's... good footwork is fundamental. The rock offers great friction and if you wear some Lycra tights you're bound to climb a grade harder! 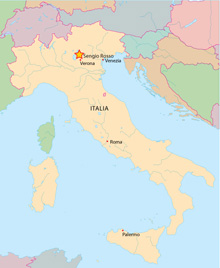 Despite the crag being located at 900m, the best time of year is from October to the end of April thanks to the particular micro-climate and climbing in a T-shirt above the sea of fog is a common occurrence in winter. Avoid climbn here on overcast days in winter.