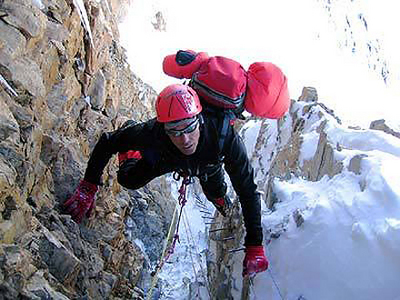 27 July 2004 Mario Dibona, Renato Sottsass, Marco Da Pozzo and Renzo Benedetti reach the summit of K2. 28 July 2004 both Mario Lacedelli and Luciano Zardini stand on the 8611 m high summit of the great mountain. More than a month has passed since their arrival at Base Camp, a month of continuous activity, of ascents and descents to make the best use of the weather conditions. To acclimatise and, step by step, get closer to the final attempt that finally awarded the Scoiattoli di Cortina expedition. Renzo Benedetti, just like his companions, had ample time to test the Eider Supershield which, like a second skin, accompanied up to Camp 3 at 7300m. Here are Benedetti's impressions after this emotional and demanding test on the mountain of mountains.

If the choice of clothing is of fundamental importance in any alpine ascent, this is even more the case when confronting the highest altitudes in the world.

K2's 8611m definitely demanded the highest quality technical gear, without neglecting comfort and practicality. It is for this reason that the Gruppo degli Scoiattoli di Cortina placed their trust in Eider for their "K2 Expedition 1954-2004."

And so, if the "Articheski" carried out the lion's share of the work from 7200m to the summit, the work carried out on the lower sections of the mountain by the Supershield suit is of equal importance.

I climbed up to Camp 2 (6600m) various times and to Camp 3 (7300m) wearing this exceptional piece of equipment, both during a storm and in relentless sunshine. Regardless of the conditions, I never encountered any problems: if it was too hot I simply opened the waterproof zippers on the sides of the trousers, and if it was too cold all I had to do was put on the lightweight Duvet Stroke Eider.

Before departing for K2 I thought I wouldn't use the suit very much because at 0.910 kg it seemed particularly heavy. I hadn't realised that, if combined with a lightweight base layer, it would easily stand up to any test the mountain had to offer.

When climbing up demanding mixed terrain such as House's Chimney or the Black Pyramid I immediately tested the resistant nature of the materials implemented by Eider to make the Supershield.

The stategiaclly placed Kevlar reinforcements in the lower leg passed some difficult tests: rocky outcrops, unwanted crampons and... controlled slides down the snow field beneath Camp 1 to quickly reach Base Camp. Fantastic Supershield! The stretchable fabric meant that I could also use it in the lightweight sleeping bags in the upper camps, almost without any inconveniance whatsoever... as if it were a second skin!

I'll return to the Himalaya: in my rucksack there will always be space for this extraordinary piece of clothing. And I'd love to see this same suit (including the hood) as a practical two-piece suit (trousers + jacket) to take advantage of its exceptional qualities in an alpine environment.

To a friend of K2
Renzo Benedetti